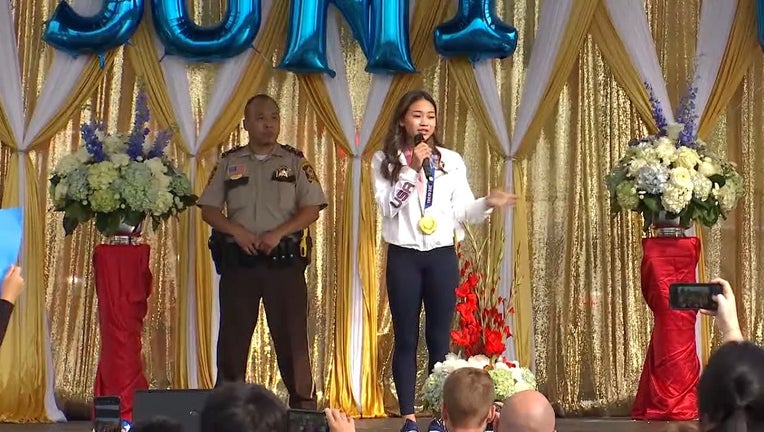 Sunisa Lee speaks on stage at a celebration for her gold medal wins in St. Paul.

(FOX 9) - Acclaimed gymnast Suni Lee says she was the victim of a racist attack while out in Los Angeles, according to a recent interview with a pop culture website.

The St. Paul native, who is of Hmong descent, won gold in the Olympics last summer and most recently is competing on "Dancing with the Stars," says she was left shaken by the incident that she says happened with the last few weeks.

In an interview with the blog Pop Sugar, Lee says she was waiting for an Uber after a night out with friends when a group in a car pulled up to them yelling slurs.

According to Lee, the people yelled "ching chong" and told them to "go back to where they came from." One person in the vehicle even sprayed her with pepper spray, Lee recounted.

In the chaos, Lee says the group was able to speed away.

"I was so mad, but there was nothing I could do or control because they skirted off. I didn't do anything to them and having the reputation, it's so hard because I didn't want to do anything that could get me into trouble. I just let it happen," she told Pop Sugar.