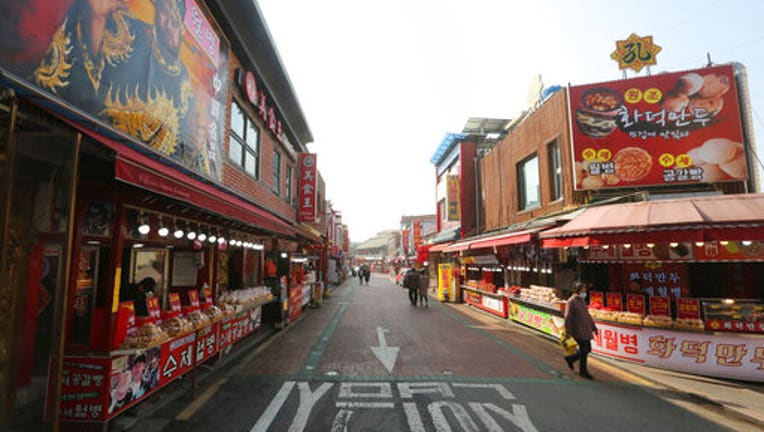 In this Feb. 14, 2020, photo, a woman wearing a face mask walks on a almost empty street at the Chinatown in Incheon, South Korea. Even as cases and deaths from the new virus mount, fear is advancing like a tsunami - and not just in the areas surroun

TOKYO (AP) — You might have heard that the fear of a new virus from China is spreading faster than the actual virus.

From earnest officials trying to calm a building panic. From your spouse. From the know-it-all who rattles off the many much more likely ways you’re going to die: smoking, car accidents, the flu.

None of it seems to matter.

As the number of cases rise — more than 76,000 and counting — fear is advancing like a tsunami. And not just in the areas surrounding the Chinese city of Wuhan, the site of the vast majority of coronavirus infections.

Subway cars in Tokyo and Seoul look more like hospital wards, with armies of masked commuters shooting dirty looks at the slightest cough or sneeze. A restaurant owner in a South Korean Chinatown says visitors have dropped by 90%.

You've probably got a better chance of winning the lottery than buying face masks in parts of Asia. Conferences and events have been disrupted from Beijing to Barcelona to Boston. Quarrels in Japan; riots in Ukraine. Rumors that toilet paper and napkins could be used as masks emptied East Asian store shelves of paper goods.

"Fear is a very strong emotion, and the prevailing fear over the new coronavirus drives people to do things irrationally without thinking straight,” said Bernie Huang, 31, a high school teacher in Taipei, Taiwan, who resisted the city’s now-easing toilet paper buying spree.

If you take the long view, panic has marched in lockstep with pandemic for as long as history has been recorded. The plague that devastated Athens in the fifth century BC. The Black Death that eradicated much of Europe in the 14th century. And, more recently, AIDS, Ebola, SARS, MERS, swine and bird flu.

Scientists, statisticians and people well away from the line of fire may scoff, but the fear, which is spread by word of mouth and, more rapidly, through online posts, is real.

“Fear can do more harm than the virus,” Singapore Prime Minister Lee Hsien Loong said in response to panic buying of toilet paper, canned food and instant noodles after the government raised a risk alert over the new virus.

It's perhaps most keenly felt in the places where crowds gather: churches, shopping areas, schools.

In the Philippines, nearly half of the pews were empty for recent Sunday Masses in many churches. At a Protestant church in northern Seoul, officials switched entirely to online worship after it was found that a virus patient had attended services days before he tested positive.

The huge Lotte Department Store in Seoul closed for several days for disinfection after it was found that a Chinese tourist with the virus visited. It reportedly lost about 20 billion won ($16.9 million) in revenue, based on figures by security analysts.

A mobile trade fair in Barcelona was canceled. PlayStation maker Sony pulled out of a video game conference in Boston over "increasing concerns" related to the virus. Organizers said the event will go on next week but "with enhanced cleaning."

At Namdaemun, Seoul’s largest traditional market, businesses saw huge drops in sales after an infected person was found to have visited the area last month.

“Merchants say their businesses are now dying,” said Chun Yong-bum, head of an association of thousands of merchants at Namdaemun.

The South Korean Education Ministry recently issued an advisory to universities to postpone the March start of the upcoming semester because of worries that thousands of Chinese students will return to schools from abroad.

The most eagerly-awaited gathering in Asia — the upcoming Summer Olympics in Tokyo — has been beset by fear, too.

Although he later backtracked, Tokyo Olympic CEO Toshiro Muto said recently that he was “seriously worried” the virus could disrupt the Olympics and Paralympics.

“One thing I am noticing at the moment is fear is spreading quicker than the virus, and it is important that we quell that fear,” said Craig Spence, the spokesman for the International Paralympic Committee.

In Japan, fear and the virus have intersected most visibly on a huge cruise ship in the port of Yokohama, where thousands of passengers and crew were quarantined for two weeks as hundreds of people on board tested positive for the virus.

One quarantined passenger hung a banner that read: “No information ... Stressed. Many bad rumors.”

The internet foments many of those rumors.

In Malaysia, a social media rumor that mandarin oranges carry the virus caused some initial panic until health officials debunked it.

When news broke that a journalist who reports on Japan’s leader had contact with an infected driver and was in self-quarantine, a web edition of the Weekly Post tabloid magazine declared: “Coronavirus has sent shockwaves to the prime minister’s office.”

Fear, and possibly a dark sense of humor, may also help explain some odd behavior: images of people using orange peels as face masks; children in strollers wrapped in what looks like dry cleaning plastic.

In Taiwan, people began stocking up on toilet paper and napkins after a rumor on the internet said they could be used as masks to stop the spread of viruses, said Yang Bo-ken, deputy director of the government’s Industrial Development Bureau.

The fear has also led to lawlessness.

In Kobe, Japan, 6,000 surgical masks were reported stolen from a hospital.

Several hundred residents fearing infection in Ukraine clashed for hours with police as they blocked a road to a building where more than 70 people evacuated from China because of the virus were to be quarantined.

Two passengers on a subway in Fukuoka, Japan, quarreled after a man not wearing a mask started coughing, prompting the man next to him to press an emergency alarm, Kyodo News reported.

“Fear is spreading among passengers. We plan to promote cough etiquette, such as wearing facial masks,” a city transport official told the news agency.

In Hong Kong, where people queued up for essential goods outside shops, three people with knives allegedly robbed a deliveryman outside a supermarket of precious toilet rolls reportedly worth more than 1,000 Hong Kong dollars ($128).

Governments have not always known how to handle the situation.

Eight Samoan citizens were refused entry at the nation's airport and sent back to Fiji reportedly because they’d transited through Singapore, which the government labels a “high risk” country, according to the Samoa Observer.

And when a Canadian teen collapsed at a building in Kuala Lumpur, Malaysia, a medical team in hazmat suits arrived. The health ministry later said it was a precautionary measure and the teen was virus free.

Foster Klug is AP's News Director for the Koreas, Japan, Australia and the South Pacific. He has covered Asia since 2005. Follow at www.twitter.com/APKlug