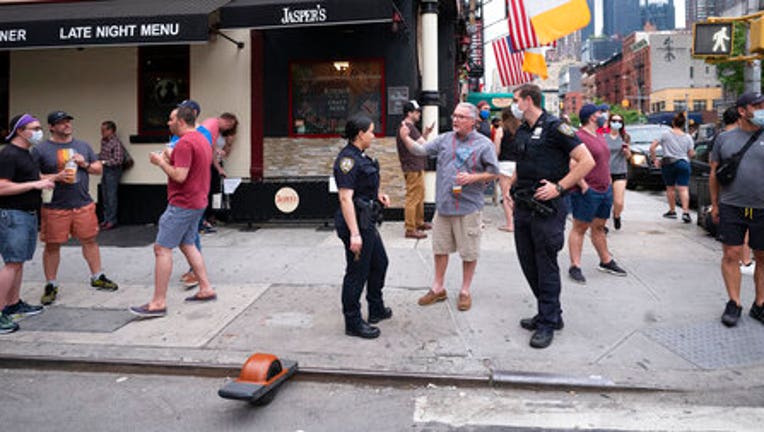 Police officers on patrol check on a small crowd outside a bar in the Hell's Kitchen neighborhood of New York, Friday, May 29, 2020, during the coronavirus pandemic. The street has been blocked off from traffic to allow residents to gather in open sp

NEW YORK (AP) — On a late Friday afternoon, there is joy and fraternity found on a blocked-off street in Manhattan’s Hell’s Kitchen neighborhood. Neighbors chat, dogs get acquainted and above all, there’s laughter. After three months of sheltering-in-place, this scene of normalcy is still not commonplace as New York City tests the waters of socializing, within the prescribed limits.

Steve Grillo lives on the street and is a walking advertisement touting his West Side community. “Everybody’s a good person,” he says. After his longtime role as an intern on the Howard Stern Show, Grillo co-owned a pizzeria there in 2009 and “that’s when I fell in love with the neighborhood.”

There was no hanging out with friends on the streets most of March and April but by the end of May, “the neighbors,” as Grillo calls them, turned out to support the owners of corner bars and restaurants. “It's ‘Cheers’ but in Hell's Kitchen," he says referencing the popular 1980s sitcom.

There were takeout food orders and drinks were mixed at the door. And a crowd gathered, which brought the police, who said they couldn’t be there. Following that, police placed a barricade, on occasion, to block traffic traffic and allow for street mingling. An impromptu block party formed with the police in attendance to monitor.

Since the end of May, barricade or no barricade, the neighbors come out and line the side street sidewalks. Saturday, Grillo hosted a wedding reception underneath a canopy outside his apartment after the ceremony was held on his building's roof. The newlyweds were neighbors, of course, and had planned to be married at West Point on the D-Day anniversary but that was scrubbed due to the pandemic.

He says this outdoor camaraderie wasn't part of the neighborhood vibe before the coronavirus hit New York City so hard and the killing of George Floyd convulsed the country. “Good people find good people. The pandemic has made us bond even more.”

While nonstop global news about the effects of the coronavirus have become commonplace, so, too, are tales of kindness. “One Good Thing” is a continuing series of AP stories focusing on glimmers of joy and benevolence in a dark time. Read the series here: https://apnews.com/OneGoodThing