Days ahead of Christmas, Chicago's O'Hare Airport is among the busiest airports in the country. FOX 32 Chicago's Joanie Lum joined LiveNOW from FOX's Josh Breslow with a look inside the airport.

Concerns about illness or inflation aren’t stopping Americans from hitting the roads and airports this holiday season. But a massive winter storm might.

Forecasters predict an onslaught of heavy snow, ice, flooding and powerful winds from Thursday to Saturday in a broad swath of the country, from the Plains and Midwest to the East Coast. A surge of Arctic air will follow. The Christmas weekend could be the coldest in decades.

The National Weather Service said Wednesday the storm was so large and encompassing that around 190 million people are currently under some type of winter weather advisory.

Southwest Airlines said it has canceled 500 of its 4,000 scheduled flights on Thursday and Friday. The company said it wanted to maintain safe operations for both passengers and crew. 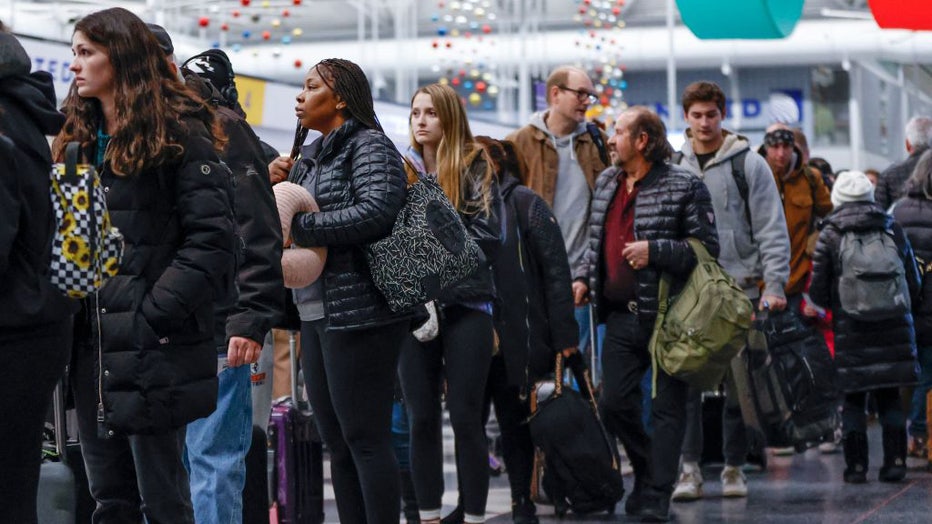 Travelers wait in line to check-in for their flights at the United Airlines Terminal 1 ahead of the Christmas Holiday at O'Hare International Airport on December 22, 2022, in Chicago. (KAMIL KRZACZYNSKI/AFP via Getty Images)

FlightAware was also expecting at least 364 flights to be canceled Thursday at O'Hare and Midway airports in Chicago. Earlier this week, those two airports said they had 350 pieces of snow removal equipment and 400,000 gallons of pavement de-icing fluid on hand for the storm.

Jean-Paul Blancq got to Boston's Logan Airport a day early for his Thursday flight home to New Orleans. Blancq had to take a bus to Logan from his seasonal job in New Hampshire and was unsure of the storm's path.

"I hope that my flight doesn’t get canceled because I don’t know what I’ll do," Blancq said.

Bianca Thrasher-Starobin, a consultant and lobbyist in Atlanta, flew into New York Wednesday morning for an event and planned to fly out the same night.

RELATED: When storms 'bomb out': Explaining how a bomb cyclone forms

"I’m trying to get out of this weather. I would have stayed longer but I just can’t take that chance," she said as she raced through LaGuardia Airport.

Bus and train travelers were also bracing for cancellations and delays.

What travelers need to know if flight is delayed or canceled

The 'Bomb Cyclone' winter storm will impact millions of Americans, leaving many stuck at airports across the U.S. Former airline executive, Kurt Ebenhoch gave LiveNOW from FOX's Josh Breslow some little-known tips about what to do if your flight is delayed or cancelled.

As of late Wednesday, Amtrak had canceled train service on around 30 routes, some through Dec. 25. Greyhound canceled bus service on 25 routes for Wednesday and Thursday, including service from Las Vegas to Denver, Denver to St. Louis and Chicago to Minneapolis, Memphis and Nashville.

The weather added uncertainty to what was expected to be a busy travel season. Earlier this month, AAA estimated that nearly 113 million people would travel 50 miles from home or more between Dec. 23 and Jan. 2. That’s 4% higher than last year, although still short of the record 119 million in 2019.

Most planned to travel by car. About 6% will travel by air, AAA said. Either way, many travelers found themselves hastily changing their itineraries.

Joel Lustre originally planned to drive from Bloomington, Indiana, to McGregor, Iowa, on Thursday. But he shifted his work schedule, and his wife canceled an appointment so they could leave Wednesday and beat the storm.

In Montana, several ski areas announced closures Wednesday and Thursday due to the extremely cold temperatures and sustained winds. Others scaled back offerings. Schools were also closed due to the cold.

Authorities across the country are worried about the potential for power outages and warned people to take precautions to protect the elderly, the homeless and livestock — and, if possible, to postpone travel.

"If you don’t have to be out driving, especially on Friday, we ask that you don’t be out there," said Ron Brundidge, Detroit's public works director. Brundidge said 50 trucks will be out salting major roads on around-the-clock shifts once expected rain turns to snow on Friday.

Kelli Larkin arrived Wednesday from Florida for a holiday trip to New York. She plans to fly back Saturday night but said she'll watch the forecast and change her return flight if she has to.

With heavy snowfall in the Minneapolis area, Margaret Anderson Kelliher, the director of Public Works for the city, spoke with LiveNOW from FOX's Josh Breslow about the preparations.

Kurt Ebenhoch, a consumer travel advocate and former airline executive, said fee waivers give airline passengers valuable time ahead of a storm to figure out alternate days and routes. But consumers should read the fine print carefully. Airlines might charge the difference in fares if passengers book beyond a certain window, for example.

The urge to travel and visit family and friends over the holidays appeared to outweigh concerns about illness. The Centers for Disease Control and Prevention said coronavirus cases and deaths have increased in recent weeks, and the trio of COVID-19, seasonal flu and respiratory syncytial virus, known as RSV, continues to stress the health care system.

Inflation also didn’t seem to be cutting into holiday travel demand. The average round-trip airfare rose 22% to $397 in the second quarter of this year — the most recent period available — according to U.S. government data. That was higher than overall U.S. price inflation, which peaked at 9% in June.

Lindsey Roeschke, a travel and hospitality analyst with Morning Consult, a market research company, said travelers appear to be cutting back in other ways.

In a recent survey, Morning Consult found that 28% of U.S. travelers were planning a one-day trip for the holidays, up from 14% last year. There was also an uptick in the number of people planning to stay with friends or family instead of at hotels. Roeschke thinks higher prices were a factor.