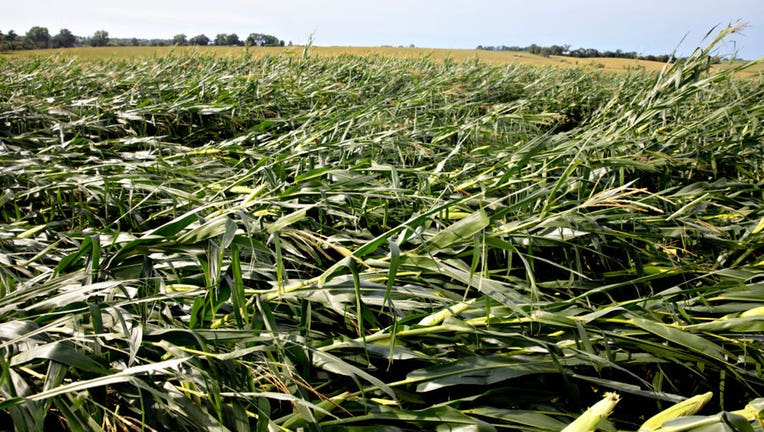 Corn plants, blown over by a derecho storm, lay in a field on August 10, 2020 near Polo, Illinois. The storm, with winds gusts close to 100 miles per hour, downed trees and power lines as it moved through the city and suburbs. (Photo by Daniel Acker/

The National Weather Service's Storm Prediction Center (SPC) said Tuesday morning that the "intense derecho" traveled from southeast South Dakota all the way to Ohio, a path of 770 miles in 14 hours.

When the system reached Des Moines, forecasters said wind gusts were clocked at more than 100 mph. That caused devastation across farm communities.

A derecho is a widespread, long-lived wind storm that is associated with a band of rapidly moving showers or thunderstorms.

“This morning I had a farmer reach out to me to say this was the worst wind damage to crops and farm buildings that he has ever seen across the state in such a wide area,” Iowa Gov. Kim Reynolds told reporters on Tuesday.

According to data from the USDA, 23.4 million acres were seeded with corn and soybeans this spring.

By early estimates that would mean some 43 percent of Iowa’s 2020 corn and soybean crop has been damaged or destroyed by the violent storm system, according to Radio Iowa.

The most significant damage is to the corn crop, which is in the advanced stages of development, nearly a month away from the beginning of harvest.

Satellite imagery shows extensive crop damage through about one-third of the center of the state from east to west. 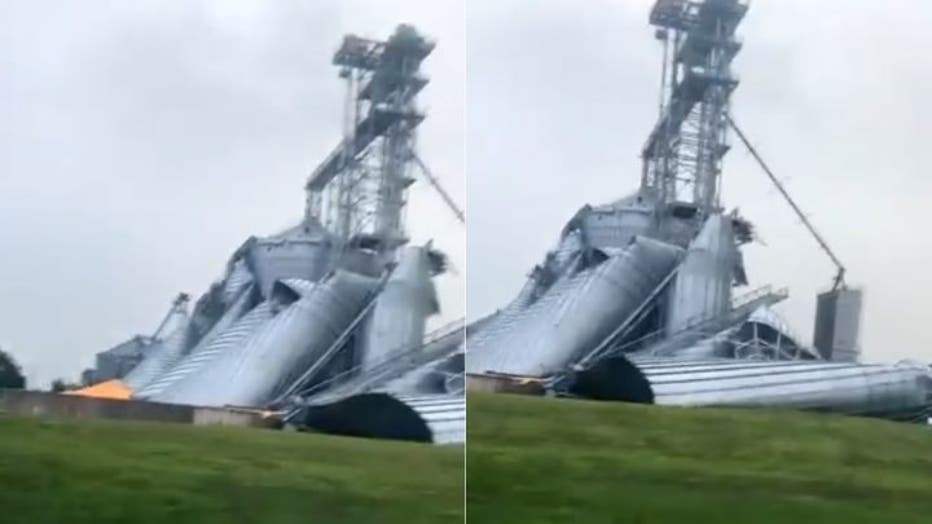 A grain elevator in Luther, Iowa, collapsed from the intense winds of a derecho on Monday, Aug. 10, 2020. (@MONASTiCNiCK via Storyful)

“It’s incredibly devastating to see what’s happening to crops, and to structures all across the storm path,” he told reporters.

Others posted photos to social media showing the devastation from the storm in their fields.

Roger Zylstra, who has farmed in central Iowa near Kellogg since 1980, told the Associated Press that four of his hog barns lost their roofs, two of his machine sheds suffered significant damage and many of his corn acres were destroyed.

Zylstra, 69, said crop insurance will help, but that the financial hit will be devastating for many farmers.

“The question remains for all of us is, what happens in the next five or six weeks? How much can we salvage out of these fields?” Zylstra said. “I know that some people won’t survive this. But there’s a fair number of people that will figure out how to hang in there, and we’ll keep doing what we do.”

In Jasper County, farmer Brian Rumbaugh told KCCI-TV that the storm flattened most of his 450 acres of corn, something he's never seen in his 50 years of farming.

“This is the worst one I've ever had,” he said. “We had tornadoes go through a while back, tornadoes 300-400 feet wide, (but) this was everything.”

State officials said Tuesday that farmers may be eligible for federal assistance as the state continues to assess storm damage.

“A part of that federal assistance could be a Small Business Administration declaration or a U.S. Secretary of Agriculture designation, which provides resources for impacted farmers,” Iowa Homeland Security and Emergency Management Director told KCCI.

Iowa officials reported roofs torn off homes and buildings, vehicles were blown off roads and hit by trees, and people hurt by flying debris. One death and dozens of injuries were reported in the state.

President Trump tweeted Tuesday night he was "sad to see" the damage from the derecho in the Midwest.

"112 mile per hour winds in Midway, Iowa! The Federal government is in close coordination with State officials," the president wrote. "We are with you all the way - Stay safe and strong!"