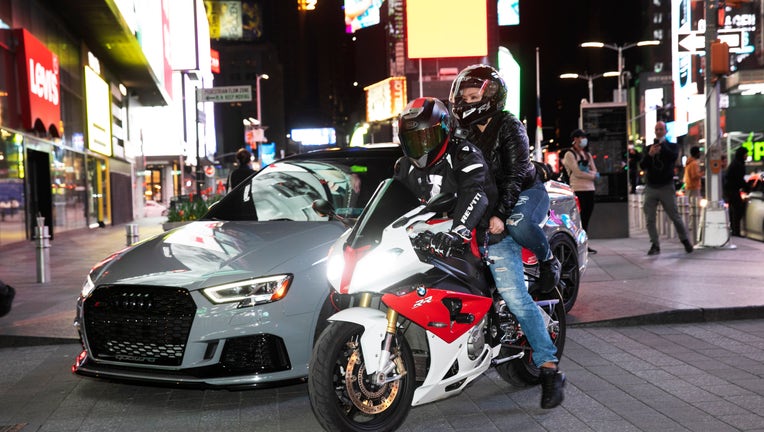 In this Saturday, May 2, 2020 photo, a sports car and motorcyclists are part of the scene in New York's Times Square during the coronavirus pandemic. Car mavens and motorcyclists normally wouldn't dare rev their engines in Midtown, but now they're ea

NEW YORK - Danny Lin cruised his white sports car down Broadway, the bright lights of Times Square gleaming off his sharply detailed Audi R8. He looped through the tourist hotspot again and again, navigating around Corvettes, Mercedes, Mustangs and BMWs — a parade of high-priced vehicles gathered for a rare photo-op.

“I never bring my car here,” said the 24-year-old from Queens. “Only for today, to get some cool shots.”

From a star turn in “Taxi Driver" to the Naked Cowboy to the million people who crowd its streets on New Year's Eve, the “Crossroads of the World” has for generations been an iconic New York backdrop in movies, culture and the arts. Now, Times Square has taken a turn toward Tokyo Drift, just without the “Fast and the Furious,” as car-loving New Yorkers flock to the barren streets of the theater district.

Car mavens normally wouldn’t dare rev their engines in gridlocked Midtown, but they’re eagerly driving into Manhattan to take photos and show off for sparse crowds walking through the famed streets.

With the weather turning toward summer and restlessness settling in after six weeks of mandated social distancing, hundreds of automobile aficionados rolled down Broadway on Saturday night.

“This is the only time we could come down here and take photos,” Lin said.

At least 100 pedestrians were wandering the area when the cars began roaring down Times Square’s main drag Saturday, along with dozens of motorcycles in one crew that created a deafening buzz. Police — some in cars, some on horseback — were mostly patient with the procession and only intervened if cars remained parked for too long.

Some families with young children also drove through in minivans and SUVs, taking in Times Square as if touring neighborhood Christmas lights. 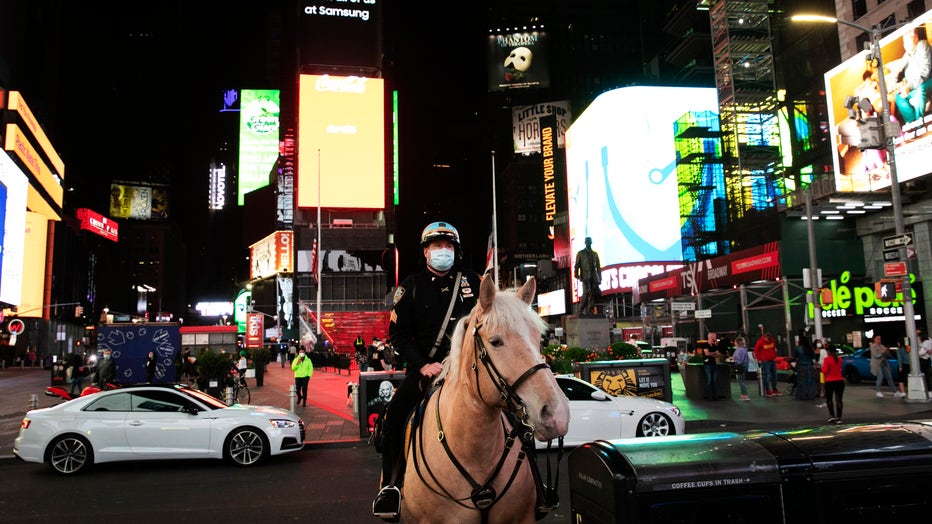 In this Saturday, May 2, 2020 photo, a New York City mounted police officer is posted in Times Square to keep an eye on parades of sports cars and motorcycles cruising through during the coronavirus pandemic. (AP Photo/Mark Lennihan)

Onlookers, mostly keeping six feet apart and wearing facemasks, cheered and took video from the sidewalks as suped-up cars and bikes went by.

The area maintained some of its touristy quirks. A violinist with a glowing wand and blue hair played for tips, and a salsa-dancing couple put a camera phone on a tripod to record their performance. One woman wearing a leather leotard biked down Broadway a few times, cycling next to a giant van with a cameraman hanging out the passenger window to record as she sang and danced.

By 11 p.m., sports cars were backed up for blocks along Broadway, and police closed the road from 47th Street down through Times Square, effectively ending the party.

Car collectors have been driving into the area for weeks in smaller packs. Mike Hodurski and Steve Cruz brought their Chevrolet pickup trucks Wednesday night and took photos in front of a light-up American flag at the corner of Broadway and 43rd Street.

It was already Hodurski’s second trip to Midtown amid the outbreak. This time, the MTA bus driver brought a blue 1977 Chevy C10 pickup that he’d purchased earlier that day.

“It’s a lot of fun. Might as well take advantage of it now, while nobody’s over here,” Hodurski said. “The streets are dead. You’d never get to see the streets like this. So we said, ‘You know what, screw it,’ and we all got together.”

Hodurski is from Queens and Cruz from Brooklyn, and both said they usually avoid Times Square as much as possible — too many tourists and too much traffic. There was hardly anyone in the area when they cruised through Wednesday. They spent about five minutes in front of the flag before a cop asked them to keep moving.

Andre Godfrey has driven his 2018 Ford Mustang — with glowing red shark teeth embedded in the grill — into Times Square twice. He and a buddy came around 3 a.m. last Thursday, when the area was completely empty, and pulled his car up onto a sidewalk for a glamour shot. 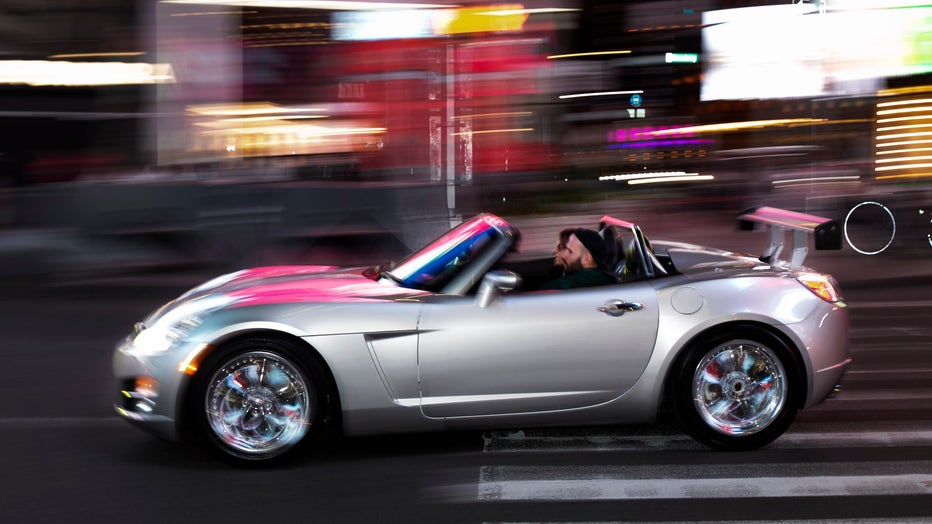 In this Saturday, May 2, 2020 photo, a man drives his convertible sports car through New York's Times Square. Times Square has taken a turn toward Tokyo Drift, with car-loving New Yorkers flocking to the theater district left empty by stay-at-home or

“Nobody bothered us,” Godfrey said. “There was one police officer down the street, like a crossing agent, and they didn’t really seem bothered by us on the sidewalk.”

He came back Saturday after hearing from a friend that a crew of over 100 BMWs was heading toward the area. That caravan never got into Times Square — it arrived in Midtown shortly after police blocked off Broadway.

“This is crazy,” Godfrey said.