Police horses on the run

Two horses from the NYPD Mounted Unit got loose in Brooklyn and trotted almost two miles by themselves. (Video: Tanya Bukai and Jeff Grazi via Storyful)

NEW YORK - A pair of police horses took off by themselves and dodged traffic on the streets of Brooklyn on Thursday.

Their caper began when a sergeant and an officer from the NYPD Mounted Unit had to stop because the officer had a "minor medical episode," police said. The cops dismounted at Quentin Road and East 8th Street in Midwood to call for EMS at about noon.

Then something reportedly spooked the horses, cops said, and Freedom and Samson broke free, trotted over to Ocean Parkway, and headed south toward Coney Island.

Some bystanders in a car, Tanya Bukai and Jeff Grazi, captured video of the horses, in single file, darting past a FedEx truck and a few cars.

"Um, do they know they're going in the wrong lane?" Grazi can be heard saying on the video. 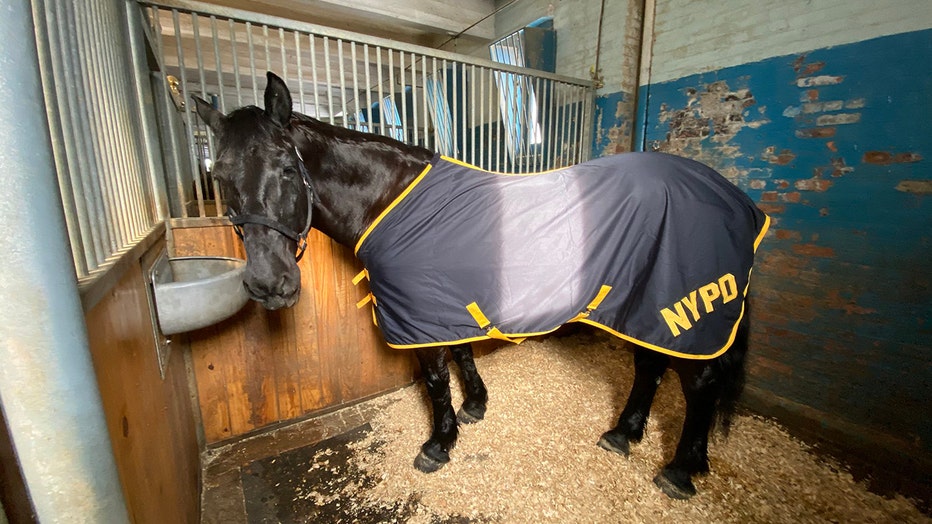 The Emergency Service Unit quickly responded and took chase, police said. ESU officers corralled the horses near 2800 Ocean Parkway near Brighton Beach, which is about 2 miles from where they got loose. Police loaded Samson and the aptly-named Freedom into a trailer and brought them back to their stable.

Medics brought the Mounted Unit sergeant and officer to NYU Langone Brooklyn. The officer received treatment for the medical episode while the sergeant received care because one of the horses stepped on his foot, the NYPD said. "You might have seen @NYPDSpecialOps Mounted horses Samson & Freedom roaming around the streets of Brooklyn earlier today," police tweeted with photos of the horses in their respective stall. "Luckily, the officers are doing well & the horses are back in the stable. No more horsing around for these two."

No word if the equines were trying to get to a carousel at the Coney Island boardwalk.

The NYPD has 55 horses. Like their neighbors on Broadway, they come to New York as adults and audition. The NYPD only keeps horses that are calm and friendly, given their level of interaction with the public. The horses end up playing such a crucial role in policing and community relations that their dedicated partners don't mind it when their buddy wants to eat all day.