The Blue Ridge Fire that started in the west end of Corona spread to Orange County on Monday. Firefighters are now on the third day of the firefight.

IRVINE, Calif. - Two massive wildfires burning in Southern California drove more than 80,000 residents from their homes this week as firefighters on Wednesday continued to battle the flames fueled by gusty winds and low humidity.

The two fires, called the Silverado Fire and Blue Ridge Fire, had grown to nearly 30,000 acres combined since erupting on Monday and prompted one of the state’s utility companies to come under scrutiny for its potential role in sparking the new blazes. 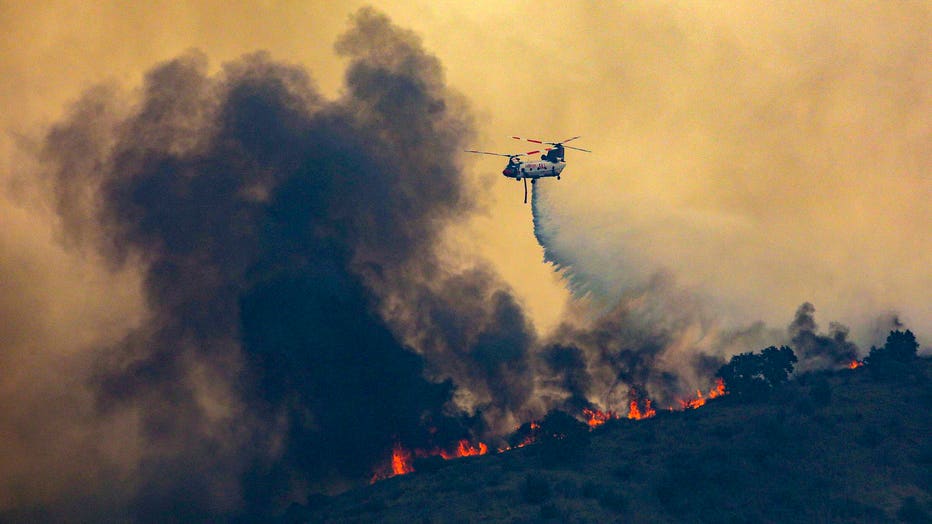 Southern California Edison on Wednesday was trying to determine if one of its power lines started one of the massive fires. The utility defended its decision not to institute a type of blackout used increasingly as a means of protecting residents after several devastating wildfires in the state, including a 2018 inferno sparked by PG&E equipment that nearly razed the community of Paradise, killed 85 people and destroyed 19,000 homes and other buildings.

“I don’t know why they did not shut power off,” attorney Gerald Singleton, who has sued utilities for devastating wildfires caused by their equipment, told the Associated Press. “They seem to be still be operating as if climate change and all these things we’re dealing with are not a reality.”

The Silverado Fire broke out just before 7 a.m. Monday near Irvine, a city of 280,000 south of Los Angeles. According to SoCal Edison’s report to state utility regulators, a “lashing wire” that ties a telecommunications line to a supporting cable may have come into contact with a separate 12,000-volt Edison conductor line above.

The second Blue Ridge Fire farther north in Orange county, which broke out several hours later in the brushy hills of Yorba Linda, kept more than 80,000 people from their homes Tuesday as winds returned.

As of 5 p.m., all evacuation orders were lifted in reference to the Blue Ridge Fire, according to the Orange County Fire Authority.

Edison spokesman Chris Abel said wind speeds in the mountains above the city of Irvine at the time had not reached the threshold to pull the plug on the power, though they did later in the morning when some electric circuits were cut.

“It’s not something that we take lightly,” Abel told the Associated Press of the decision to shut off electricity. “We know that not having power is a tremendous burden on our customers.”

“It’s tough for any firefighter, certainly any fire chief ..., to feel this helpless when you’ve got part of our fire family fighting for their lives,” Fennessey said at a Tuesday news conference.

Three other firefighters had suffered lesser injuries battling the blazes.

At least 10 homes were damaged and thousands of homes remained threatened as flames moved toward neighborhoods. As of Wednesday evening, the Silverado Fire was 25% contained and the Blue Ride Fire was 16% contained.

The winds were subsiding and Wednesday through the rest of the week should be calm, according to the National Weather Service. However, forecasts called for continued warm, dry weather around the state into November, without a trace of rain.

The nation’s largest utility said it restored power to more than 300,000 customers, and expected to nearly complete the work by late Tuesday night, with a small number having to wait until Wednesday after crews do inspections to make repairs and ensure equipment is safe. PG&E said it received more than 130 reports of damage or hazards to its equipment.

Scientists have said climate change has made California much drier, meaning trees and other plants are more flammable. October and November are traditionally the worst months for fires, but already this year 8,600 wildfires in the state have scorched a record 6,400 square miles and destroyed about 9,200 homes, businesses and other buildings. There have been 31 deaths.

Gov. Gavin Newsom said Tuesday that 42 wildfires had erupted over the 24 hours that ended Tuesday morning.

When the Orange County fires broke out Monday morning, Edison had only cut power to 30 customers in the Santa Clarita Valley north of Los Angeles. As of Tuesday night, only about 2,000 of Edison’s 5 million customers were without power, according to an outage website.

A study by the Manhattan Institute last year found that PG&E was far more likely to institute emergency shutoffs — and cut off power to far more people — than Edison in Southern California. PG&E was driven into bankruptcy in January 2019 from the costs of wildfires caused by its equipment.

Jonathan Lesser, an adjunct fellow at the conservative think tank and coauthor of the report, told the Associated Press that massive wildfires caused by failing electric equipment or debris blowing into powerlines are outliers. Some of the largest fires in state history burned this year and were sparked by lightning.

Lesser said preemptive blackouts are like a cheap insurance policy for utilities that don’t have to account for costs to hundreds of thousands of customers who lose power. When the lights go out, many businesses are forced to close, homeowners have to toss spoiled food and vital medical equipment can’t be used.

“Obviously, you can say in retrospect that it would have been better if SCE cut power where the line was. But that’s not how risk analysis works,” Lesser said. “You can’t approach this as would have, could have, should have.”