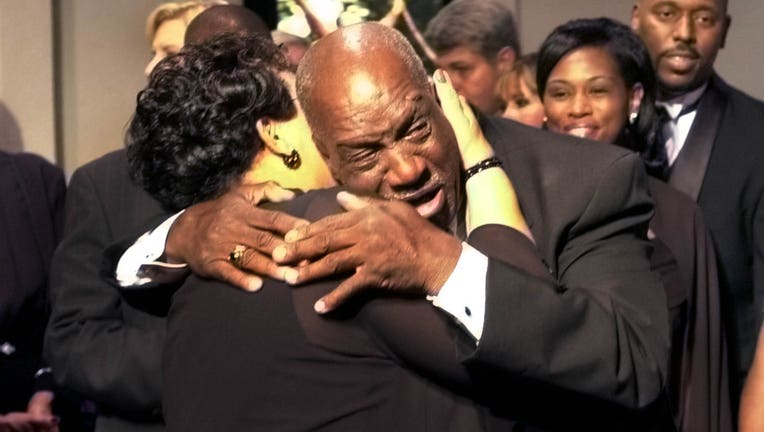 James Robert "Radio" Kennedy hugs T.L. Hanna teacher Vinnie Dill after he arrived at a screening of the movie "Radio," based on his lief, Thursday, Oct. 23, 2003, in Anderson, S.C. (AP Photo/Mary Ann Chastain)

ANDERSON, S.C. (AP) — James “Radio” Kennedy, the man who was a fixture on the sidelines of a South Carolina high school's football games for decades and whose life inspired a Hollywood movie, has died. He was 73.

“Please keep his family in your prayers in this difficult time,” Cann said in the statement.

News outlets reported that Kennedy, who had developmental disabilities, became famous around the state for his love of the T.L. Hanna High School football team and his regular appearance at games since the 1960s.

"He was just a fine, fine man," former T.L. Hanna football coach Harold Jones told The Anderson Independent Mail. “We all loved him. We will miss him incredibly.”

The 2003 film "Radio," starring Cuba Gooding Jr. in the title role, focused on Kennedy's relationship with Jones, portrayed by Ed Harris. Kennedy got the nickname “Radio” because he always carried a transistor radio, according to Carolyn Dawkins, who worked in a department store annex in the early 1970s when Kennedy would come by several times a week to talk high school sports with the store manager.

"Radio was the heart and soul of T.L. Hanna for over 50 years, and the impact he made in our community can't be overstated," Kyle Newton, a spokesman for Anderson School District 5, said in a statement Sunday morning. "He will be missed, but his legacy will live on in the countless lives he touched."

McDougald Funeral Services said a memorial service for Kennedy is scheduled for Dec. 21 at 2 p.m. at the Civic Center of Anderson.