At first, Jennifer Martin brought books home from her classroom at the start of the pandemic and started a rudimentary checkout system. But now her library has grown by the thousands, thanks to donations from strangers across the globe.

LOS ANGELES - Some public libraries are saying they will continue to lend out six Dr. Seuss titles following an announcement from Dr. Seuss Enterprises this week that it will halt publishing of the six books over racially insensitive imagery.

The books include  "And to Think That I Saw It on Mulberry Street," "If I Ran the Zoo," "McElligot’s Pool," "On Beyond Zebra!," "Scrambled Eggs Super!," and "The Cat’s Quizzer."

"These books portray people in ways that are hurtful and wrong," Dr. Seuss Enterprises said in a statement posted to their website on Tuesday.

"Ceasing sales of these books is only part of our commitment and our broader plan to ensure Dr. Seuss Enterprises’s catalog represents and supports all communities and families," it said.

The decision to cease publication and sales of the books was made last year after months of discussion, the company, which was founded by Seuss’ family, told the Associated Press.

In "And to Think That I Saw It on Mulberry Street," an Asian person is portrayed wearing a conical hat, holding chopsticks, and eating from a bowl. "If I Ran the Zoo" includes a drawing of two bare-footed African men wearing what appear to be grass skirts with their hair tied above their heads.

But the New York Public Library says it will not remove these titles from its shelves, citing its refusal to censor written material.

"As public libraries do not censor material, the very few copies we have of the 6 Dr. Seuss titles in question will remain in circulation until they are no longer in acceptable condition," a spokesperson for the NYPL told FOX News. "At that point, we will not be able to replace them, as the books are out of print."

"In the meantime, librarians, who care deeply about serving their communities and ensuring accurate and diverse representation in our collections -- especially children’s books -- will certainly strongly consider this information when planning storytimes, displays, and recommendations," the spokesperson added.

According to the NYPL, the books in question only comprise 30 copies in total across the entire library system.

The Denver Public Library also said it has no plans to pull the titles from its Dr. Seuss collection. 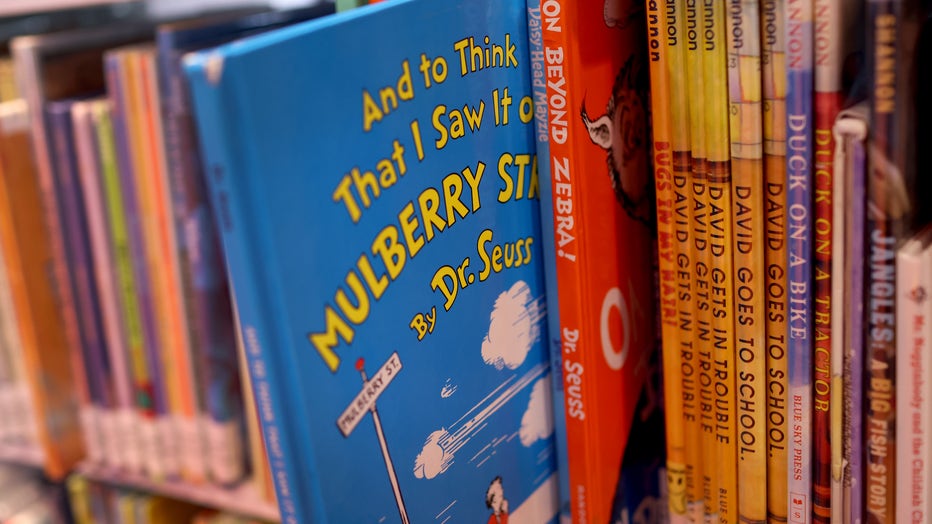 Books by Theodor Seuss Geisel, aka Dr. Seuss, including "On Beyond Zebra!" and "And to Think That I Saw it on Mulberry Street," are offered for loan at the Chinatown Branch of the Chicago Public Library on March 02, 2021 in Chicago, Illinois. (Photo Illustration by Scott Olson/Getty Images)

"Libraries across the country are having conversations around how to balance our core values of intellectual freedom, with the harmful stereotypes depicted in many children's classics," a spokesperson wrote in an email to FOX TV Stations.

"We will continue to purchase and promote diverse collections, while finding ways to help parents read and discuss books with their children with a critical eye as part of our efforts to challenge inequity," they added.

The Denver Public Library said it removes books from its collection "based on lack of circulation, accuracy of information, and condition."

Other popular children’s series have been criticized in recent years over claims of racial insensitivity.

In the 2007 book, "Should We Burn Babar?," the author and educator Herbert R. Kohl contended that the "Babar the Elephant" books were celebrations of colonialism because of how the title character leaves the jungle and later returns to "civilize" his fellow animals.

One of the books, "Babar’s Travels," was removed from the shelves of a British library in 2012 because of its alleged stereotypes of Africans. Critics also have faulted the "Curious George" books for their premise of a White man bringing home a monkey from Africa.

FOX News and the Associated Press contributed to this story.