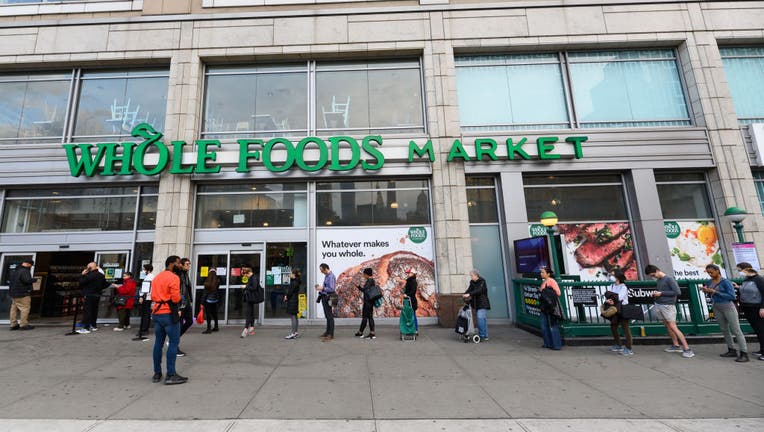 A view of people standing in line outside Whole Foods Market in Union Square as the coronavirus continues to spread across the United States on March 20, 2020 in New York City. (Photo by Noam Galai/Getty Images)

As millions of job cuts tear through the U.S. economy, a faint glimmer of light has emerged: Some employers are trying to maintain ties to the staffers they're letting go so they can more quickly rehire them once the viral outbreak has passed.

Several large retail chains are furloughing workers — a form of temporary job cut that often maintains health insurance — rather than laying them off. And many small businesses, too, are keeping in touch with workers they've had to let go.

“Anyone who's trying to lay off workers is already thinking about how they can bring them back," said Jania Bailey, CEO of FranNet, a consultancy that works with franchise companies.

One of them is Tracy True, who said she's keeping in touch at least once a week with the 10 furloughed staffers of her clothing store in Vestavia, Alabama.

How long millions of other laid-off employees will remain without work will help determine the depth and duration of a U.S. recession that's almost surely begun and is destined to worsen in coming months.

Workers on temporary layoff typically spend less time unemployed compared with those who permanently lose work and must transition to new industries and acquire new skills. For the economy to recover relatively fast, many workers would need to return quickly to their former jobs.

In Europe, some countries are directing a portion of their aid to help companies avoid layoffs by putting staffers on either reduced hours or paid leave. Governments will typically pay a chunk of the salaries of employees while they're not working.

In the United States, some economists are more pessimistic. They fear that even companies that intend to rehire workers will struggle to do so if the coronavirus outbreak lasts into late summer or fall. And even when shutdown orders are lifted, consumer spending may be slow to recover as people remain wary of congregating in groups.

Bryan and Michael Morin of Federico's Pizza in Belmar, New Jersey talk about their decision to take out a loan to keep their employees paid and employed.

“There is a strong possibility that the crisis goes on long enough that employer-employee relationships will begin to fray," said Martha Gimbel, an economist at Schmidt Futures, a philanthropic organization.

On Monday, former Federal Reserve Chair Janet Yellen suggested that the U.S. economy could experience a “V-shaped” recovery, in which a deep recession is followed by a strong rebound. Yet she cautioned that "if firms sever their connections to their workers,” a quick recovery would be unlikely.

The government's March jobs report coming Friday won't reflect most of those losses. It will be based on surveys that cover only the first half of March, before layoffs skyrocketed. Even so, analysts have forecast a loss of about 150,000 jobs, according to data provider FactSet. That would put an end to a record-long 113 straight months of U.S. job growth.

Still, many companies say they're already planning for when the economy turns around.

Britney Ruby Miller, co-owner of a chain of steakhouses, said her Cincinnati-based company is paying for health insurance through June for the roughly 600 workers they had to lay off.

Macy's has said it will furlough the majority of its 125,000 workers and operate with a minimal workforce after closing its 600 department stores. But it said it would continue to pay for health insurance for laid-off workers at least through May.

“We expect to bring colleagues back on a staggered basis as business resumes,” Macy's said.

The Gap, too, has furloughed 80,000 workers but will still provide health benefits for them.

And while the three major American autoworkers, as well as Honda and Toyota, have closed their factories, their unionized workers are receiving nearly their full salaries from unemployment benefits and payments from the companies. Most expect to return to their jobs.

“If it is a shorter duration of closure, we will see a lot of these layoffs be temporary," said Arindrajit Dube, a labor economist at MIT.

Yet if shutdowns persist longer, many companies that are still paying benefits will stop doing so. And some, especially smaller businesses, will close for good.

Some analysts foresee a faster rebound than after other recent recessions. Goldman Sachs estimates that the economy will contract at a 34% annual rate in the second quarter — which would be the worst quarterly showing on record. Yet Goldman expects growth to rebound 19% in the third quarter and for the economy to be nearly recovered by the end of 2021.

Most recessions after World War II were short and sharp. Layoffs were often temporary. Since the early 1990s, though, layoffs in recessions have increasingly been permanent. From autos to construction, whole industries restructured themselves with fewer jobs after the Great Recession. Technology eliminated millions of administrative and other middle-skill jobs.

Economists says it's hard to forecast any post-recession hiring patterns, especially when a downturn has been ignited by an external and unpredictable event like a pandemic. Still, some sectors of the economy, they say, could suffer permanent damage and job loss. Business travel, for example, may never fully recover, Dube said, as more companies turn to videoconferencing as an alternative.

And as Americans increasingly shop online while shut in, pressures on traditional retailers could intensify, and their furloughs could become permanent layoffs.

Another critical factor will be the effectiveness of the government's aid package for small businesses and unemployed workers. The legislation includes $350 billion for small business loans, which would be forgiven if the money is spent on maintaining their payrolls and avoiding layoffs.

It also includes a significant expansion of unemployment aid, which will especially benefit workers in hotels, restaurants and other low-wage industries. Their financial cushion will increase their ability to spend once the economy picks up again — something vital for any quick recovery.

How consumers behave in the coming months is a major concern for Michael Kanter. The co-owner of an organic food store in Cambridge, Massachusetts, Kanter has furloughed about 40% of his workers. He is covering their health care costs through April.

“We are forever hopeful that we can bring some, if not all, of them, back,” he said.