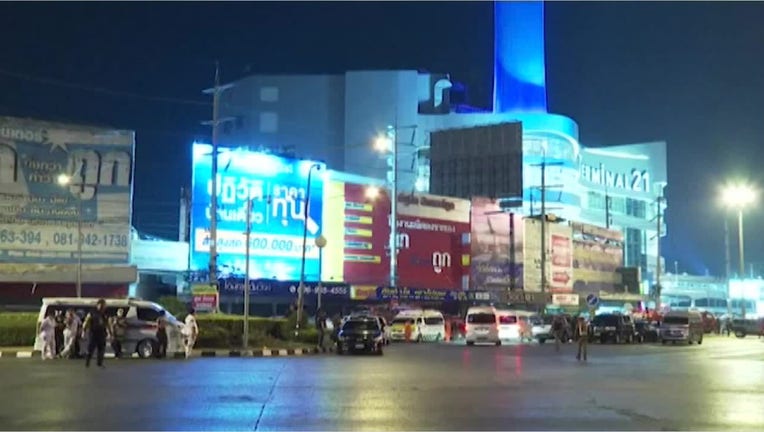 NAKHON RATCHASIMA, Thailand (AP) - It's still unclear how a Thai soldier managed to steal from an army base the weapons he used to kill 29 people, but a gun researcher said the theft indicates that the facility had lax security.

The gunman, identified as Sgt. Maj. Jakrapanth Thomma, snatched three assault rifles and two machine guns from the base and escaped in a stolen military vehicle.

His actions show "that the level of control over this base's armory was woefully insufficient in terms of manpower and access restriction," said Michael Picard, research director of GunPolicy.org.

The assailant then headed for a shopping mall, firing along the way. He held off security forces for almost 16 hours while holed up in the shopping center.

Questions about military security carry a special sting in Thailand because just a few weeks ago the country's tough-talking army commander said in an interview that he had ordered all army units to take care of their weaponry.

The Bangkok Post quoted Gen. Apirat Kongsompong as saying that "all weapons must be kept under good care and ready for use." He stressed that the army "will never let ill-minded people steal them," referring to political opponents of the current government, led by former army commander Prayuth Chan-ocha.

On Tuesday, Apirat was due to address criticism of the operation at army headquarters in Bangkok.

A junior officer who said he often withdrew ammunition from Jakrapanth's unit for his own unit's target practice said the shooter would have had to overpower soldiers guarding small armory depots to take the weapons and ammunition. The officer asked not to be identified because he was not authorized to speak to reporters.

In many past cases, guns have been quietly siphoned off by corrupt officials from police and army facilities.

The most disastrous weapons theft took place in Thailand's deep south in 2004, when Muslim separatist militants raided an army base, killed four soldiers and made off with about 400 assault rifles. Some of the weapons are believed to have been sent to Muslim militants in Indonesia's Aceh province, but most stayed with the Thai rebels, who have waged an insurgency that has claimed about 7,000 lives.

Access to the main gate to Jakrapanth's military unit, the 22nd Ammunition Battalion, was restricted on Monday, but much of the rest of the sprawling base in rural Nakhon Ratchasima province was open to through traffic.

Some people have criticized the many hours it took for Thai security forces to end the siege at the mall, among them Khunpol Khanpakwan, who was outside a public hospital morgue Monday waiting to recover his daughter's body.

His daughter, Apiksanapa Khanpakwan, 45, was killed and her 17-year-old daughter wounded when special forces fatally shot the gunman.

Though Prime Minister Prayuth has said that security forces did not kill anyone, Khanpakwan said he was still awaiting his daughter's autopsy report to determine the source of the many shots that riddled her body.

Khanpakwan wondered how a force that boasted of safeguarding its military hardware was unable to stop a lone gunman from inflicting so much bloodshed.

"How could the authorities let a culprit run around killing people around the city? Just only one person," Khanpakwan said, adding that "they are equipped with weapons but couldn't do anything to him."

Anthony Davis, a security analyst who writes for the Jane's defense publications, said it was premature to judge the response to the siege.

"In the end, you have a professional military man with a large supply of ammunition holed up in a very large building with not much clear idea on the part of the security forces how many people are in his reach," Davis said.

"It took a long time, but in a big building they couldn't risk storming in and killing a lot of people," he said.

Other concerns linger about how the worst mass shooting in Thai history was handled, particularly lapses in security.

On the night of the siege, a police perimeter kept bystanders only 100 meters from the shooting, within earshot of the automatic gunfire exploding in sudden bursts from a position security forces struggled to pinpoint.

The following morning, Thai special forces enlisted the help of a drone operator for a local TV news channel to locate the gunman. Camouflaged soldiers covered the 28-year-old man on all sides as they escorted him into the mall's basement, where authorities believed the gunman was hiding.

From there, the reporter maneuvered his thermal-sensing drone through shattered windows and into a supermarket's cold storage room, broadcasting images of Jakrapanth and several apparent hostages back to police.

Then sharpshooters' rain of fire at the gunman began and the rampage ended with his death.

On Sunday evening, less than 10 hours later, a foreign reporter was able to walk into the mall through an unlocked door that was not behind police tape.