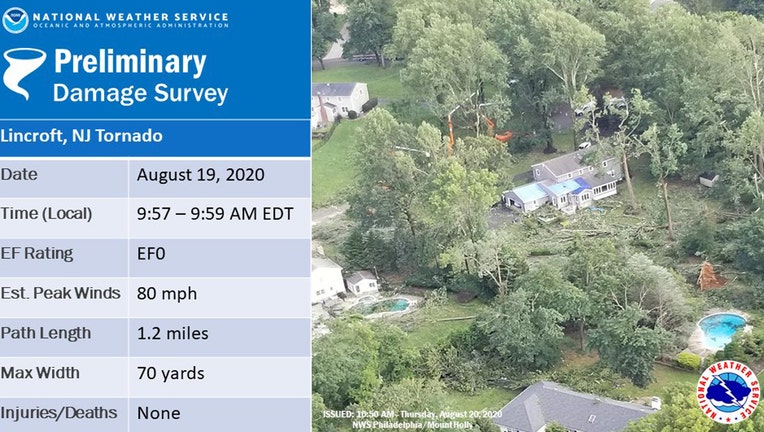 The EF0 twister, packing estimated winds of 80 mph, first struck the baseball field on the Brookdale Community College campus in the Lincroft section of Middletown on Wednesday, the weather service said. There it tossed a set of metal bleachers before heading toward a residential neighborhood.

Residents scrambled for cover as the tornado snapped trees and branches. While the weather service said the storm did not cause any direct structural damage, falling tree limbs did.

A 70-foot tree fell through the roof of a home. Hundreds of homes and businesses lost electricity.

Homeowner Ben Harris told the Asbury Park Press he hurried his family into the basement of their home as the storm approached. "When we got to the basement, you heard everything just stop, it just went quiet," said Harris. "I think it was a tornado because I never heard anything go silent like that."

A sudden burst of wild weather caught some people in New Jersey by surprise on Wednesday. Residents said they believe it was a tornado.

SUMMARY... A tornado touched down on a baseball field on the campus of Brookdale Community College in the Lincroft section of Middletown Township in Monmouth County, New Jersey. It tossed a set of metal bleachers adjacent to the field, then crossed over Phalanx Road into a residential area, with numerous trees sustaining damage on and around Hickory Lane. Tree damage mainly consisted of broken limbs and the snapping of some trees near their tops. At least one tree was also uprooted in this area. The tornado continued a little south of due east and passed near the northeast corner of the Swimming River Reservoir, causing additional tree damage. The tornado then entered another residential area near Swimming River Road and Normandy Road, producing a continued path of damaged trees. The tornado lifted as it entered the Riverdale West Park, where tree damage was no longer observed. The tornado did not appear to cause any direct structural damage, though a couple of homes sustained damage from falling tree debris. The degree of damage is consistent with an EF0 tornado with estimated maximum winds of 80 mph and a continuous, relatively narrow path of around 70 yards in width. Thankfully, no injuries occurred as a result of this tornado.