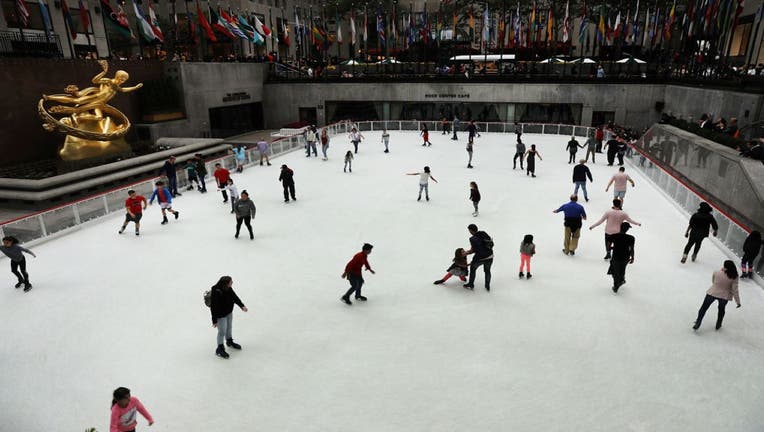 People skate on Rockefeller Center's ice rink on its opening day of the season on October 8, 2018 in New York City. (Photo by Spencer Platt/Getty Images)

NEW YORK (AP) - The Rockefeller Center ice-skating rink is opening in a limited way but on time for the holidays.

The iconic, sunken rink in midtown Manhattan is welcoming skaters Saturday afternoon as part of a tradition dating to the 1930s, according to the Rockefeller Center website.

The rink is operating at reduced capacity, with skate time limited to 50 minutes. Masks are required as a further pandemic safety measure.

The website says there’s legend that the rink was inspired by “a Depression-era skate salesman who demonstrated his product by skating on the frozen water of the Rockefeller Center fountain.”

It officially opened as a “skating pond” on Christmas Day 1936. It was supposed to be temporary but became so popular it became a permanent fixture for the holiday season.

Another seasonal fixture, the Rockefeller Center Christmas tree, went up last weekend and will be lighted Dec. 2.