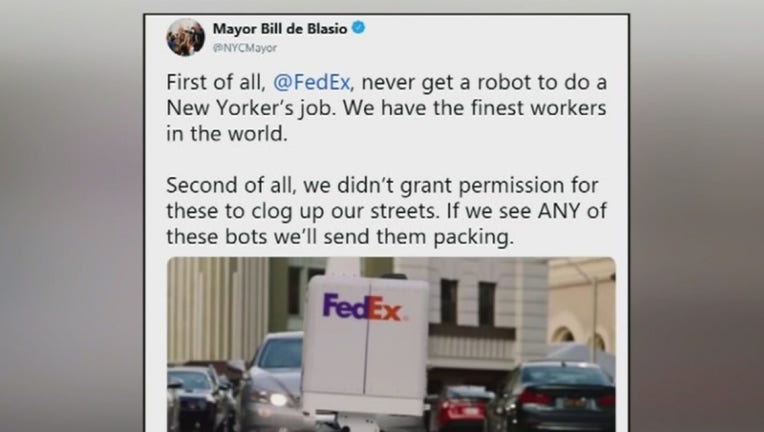 So when Twitter users tweeted videos of Roxo rolling around off a sidewalk into the street in SoHo, Mayor Bill de Blasio seemingly assumed the shipping giant chose his city as its fifth testing location.

"First of all, @FedEx, never get a robot to do a New Yorker's job. We have the finest workers in the world," de Blasio tweeted on Nov. 23. "Second of all, we didn't grant permission for these to clog up our streets. If we see ANY of these bots we'll send them packing."

In a statement, FedEx told FOX 5 NY it wasn't testing Roxo in New York. The robot merely visited the city for a special event.

"Roxo will undergo rigorous testing to ensure safety in collaboration with regulatory authorities in test markets," FedEx said in the statement. "We believe autonomous technology can help supplement operational and service efficiency for our customers and our team members, and even help to create new job opportunities."

FedEx said it did not have plans to test Roxo in New York City.