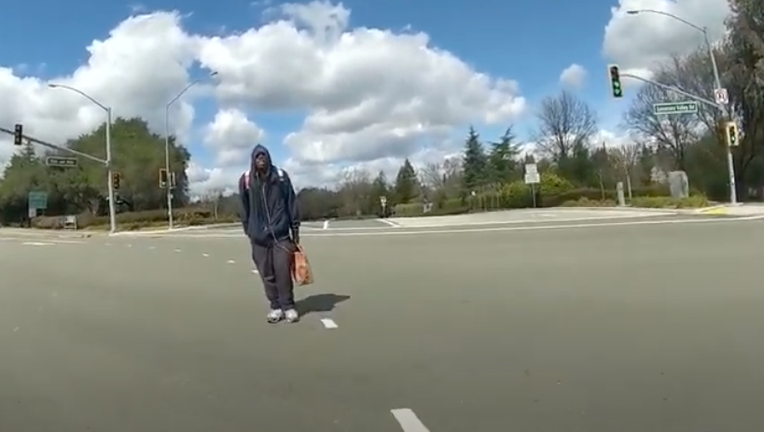 Tyrell Wilson was killed by a Danville police officer on March 11, 2021.

DANVILLE, Calif. - The Contra Costa County Sheriff on Wednesday released a series of edited videos showing a Danville police officer shooting a Black man who was suspected of throwing rocks at passing cars on the freeway, four seconds after he pulled out a small knife while crossing the street last month.

"Any loss of life is tragic, but the community can now see the truth," Livingston said. "Tyrell Wilson did in fact threaten the lives of passing motorists by throwing objects, possibly rocks, from the overpass down onto Highway 680."

Livington's statement said that Wilson was found with "numerous rocks in his jacket pocket," although the sheriff did not provide pictures of that.

"He did pull a knife on Officer Hall. He did threaten Officer Hall. And he did start advancing toward Officer Hall in the middle of a major intersection," Livingston said, despite video showing that Wilson was moving backwards with the knife. "Officers are forced to make split-second decisions to protect themselves and the public and that's what happened here."

The release of the videos showing how Wilson died when Hall shot him in the chest came just a few hours before Contra Costa County District Attorney Diana Becton took the rare step of charging Hall with felony voluntary manslaughter and assault with a semiautomatic firearm when he shot and killed Laudemer Arboleda, 33, on Nov. 3, 2018, in San Ramon.

Hall's shooting of Arboleda was "without lawful excuse or justification," the District Attorney's Office said in a statement. If found guilty, Hall faces a possible 22-year prison sentence and would be barred from being a peace officer.

The Filipino man with schizoaffective disorder had been ringing doorbells in Danville and a caller told police the young man seemed suspicious. When Hall showed up on scene, he stepped into the path of Arboleda’s Honda as he was slowly driving away from police. Arboleda was seen on video trying to drive between Hall’s cruiser and a sergeant’s SUV when Hall fired nine rounds through the windshield and passenger side window while backing away.

Hall’s attorney, Harry Stern, said Becton’s office previously deemed Hall’s use of force justified in the Arboleda case, "given the fact that he was defending himself from a lethal threat. The timing of their sudden reversal in deciding to file charges seems suspect and overtly political."

"I am confident there is no legal basis for the District Attorney to charge officer Hall in the fatal shooting of Mr. Wilson because Mr. Wilson posed, at the time the single round was fired, an imminent threat of death or great bodily injury to Officer Hall," Rains said in an email. "That said, I am not entirely confident that the DA thinks she needs a sound legal basis for charging an officer following what has just happened in the charging of Officer Hall two and a half years after the Arboleda incident, contrary to findings and determinations of persons inside and outside of her office."

The video showing Wilson's death also came one day after a jury convicted Derek Chauvin for sitting on George Floyd's neck in Minneapolis last May and killing him.

The bill says police must find alternatives to deadly force that could include "tactical repositioning" to create time and distance between an officer and a person representing a threat. Hall did not do that, the video shows.

The videos released showing the moments before Wilson's death are a compilation of Hall's body camera video, a bystander's cell phone video and static video from the street.

And although police said he was suspected of throwing rocks from the overpass onto the I-680 freeway below and that Wilson "matched the description" of the rock thrower, the video does not show him participating in that behavior.

Instead, the video shows him crossing the street at Sycamore Valley Road and Camino Ramon at about 12:30 p.m., ignoring Hall's commands to stop and approach him.

Wilson starts walking away from the officer and ends up jaywalking, which the police officer calls him out for.

Hall continues to walk after Wilson and shouts at him to "come here."

"I don't want to play this game either," Wilson responds.

Hall introduces himself as a police officer and wants to know if Wilson was throwing rocks.

Wilson responds that he doesn't want the officer to touch him.

Wilson then pulls out a knife in his right hand, 2 minutes and 7 seconds into the body camera video. He steps away from the officer --  the knife in his hand is low and by his thigh -- and challenges the officer to kill him.

Hall pulls the trigger and shoots Wilson four seconds after the knife came out.

Wilson drops in the middle of the street, and Hall calls for medical help.

A wrongful death suit filed by civil rights attorney John Burris on behalf of Wilson's family alleges a series of missteps, such as not attempting to create space between Hall and Wilson, and not taking cover after Wilson allegedly drew a folding knife.

The suit contends that Hall "never made any effort to use reasonable de-escalation tactics, instead shooting Mr. Wilson in the face."

Burris said that Wilson was homeless and mentally ill and this use-of-force was not justified.

"Whether he had a knife or not in and of itself does not justify shooting and killing him unless he attacks you," Burris said.

Burris is also representing the Arboleda family in their own wrongful death suit.

And he said that if the DA's office had acted more quickly in the Arboleda case and didn't take nearly three years to charge Hall, Wilson might still be alive.