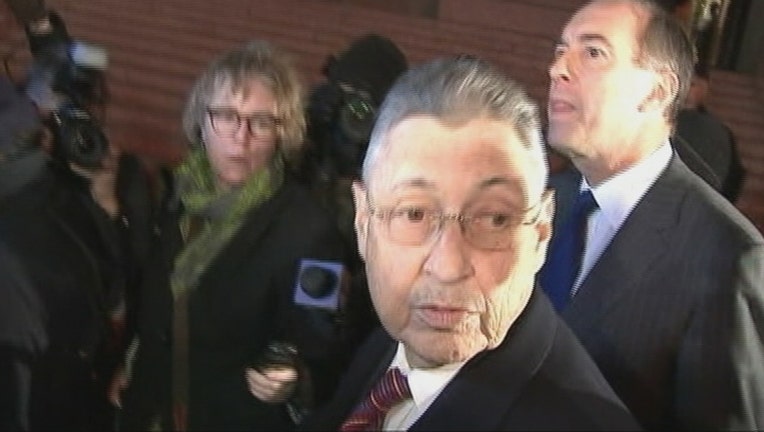 NEW YORK - Former New York Assembly Speaker Sheldon Silver has been released from a federal prison on furlough while he awaits potential placement to home confinement, a person familiar with the matter told The Associated Press.

Silver, 77, began serving his more than six-year sentence at a prison in Otisville, New York, in August, after years of fending off going behind bars in a corruption case.

He has been released to his home while awaiting a final decision on whether he can serve the rest of his sentence there in home confinement, the person said. The person was not authorized to discuss the matter publicly and spoke to the AP on Tuesday on the condition of anonymity.

The federal Bureau of Prisons didn't provide details or a reason for the transfer, but Congress gave the Justice Department expanded powers during the coronavirus pandemic to release inmates on furlough and home confinement to prevent them from catching the virus behind bars.

A spokesperson for the U.S. attorney’s office in Manhattan, which prosecuted Silver, said it sent an email to the Bureau of Prisons on Monday opposing his furlough.

Lawyers who have represented Silver at trial and at the appeals court either said they no longer represent him or did not respond to email and voice messages.

Several other prisoners at Otisville, including former President Donald Trump's onetime lawyer Michael Cohen, have been serving their sentences at home because of the pandemic.

Ex-Speaker Sheldon Silver was convicted of corruption--again. During the two-week Trial, jurors heard from 26 witnesses for the prosecution, which detailed how Silver funneled taxpayer money to a medical research project, then obtained the names of the patients, and gave them to the law firm Weitz and Luxenberg for lawsuits.

In a statement, the Bureau of Prisons noted it can transfer inmates to their home on furlough for periods of time while they are being considered for home confinement or placement in a halfway house.

Silver, a Manhattan Democrat, was once one of the three most powerful state officials in New York. He was the Assembly’s leader for more than two decades before his abrupt ouster in 2015 after the corruption allegations emerged.

He was ultimately convicted in a scheme that involved a type of illegal back-scratching that has long plagued Albany. He supported legislation that benefited real estate developers he knew. In return, they referred tax business to a law firm that employed Silver, which then paid him fees.

Appeals kept Silver out of prison for years. His initial 2015 conviction was overturned on appeal before he was convicted again in 2018. Part of that conviction was then tossed out on another appeal, leading to yet another sentencing in July.

At his sentencing, Silver’s lawyers had begged the court to allow him to serve his sentence under home confinement, rather than at a prison, because of the danger of contracting a fatal case of COVID-19. A judge turned him down.

The Bureau of Prisons has been moving some inmates to furlough in an effort to get those expected to transition to home confinement out of correctional facilities sooner.

More than 7,000 federal inmates remain on home confinement, according to Bureau of Prisons statistics. The agency had released nearly 25,000 prisoners to their homes since last March amid the coronavirus pandemic.

Under the bureau’s guidelines, priority for home confinement is supposed to be given to those inmates who have served half of their sentence or inmates with 18 months or less left and who served at least 25% of their time. But the bureau has discretion about who can be released.

In January, the Justice Department issued a memo that said the Bureau of Prisons may have to return some inmates serving extended terms of home confinement to prison once the coronavirus emergency period that was established by Congress expires.

Silver’s lawyers had been arguing that their client should be placed on home confinement because he was considered high risk for coronavirus because of his age and preexisting medical conditions.

Silver, who was elected to the Assembly in 1977 and became speaker in 1994, has a projected release date from federal custody in 2026.