Sen. Mike Lee of Utah speaks during the opening of the confirmation hearing for Supreme Court nominee Amy Coney Barrett. Lee previously tested positive for COVID-19 but was in the hearing room Monday after his spokesman said he was symptom-free.

The medical community and the CDC have said masks are important tools for stopping the spread of COVID-19 when worn by infected persons.

Lee, a Utah Republican, was among the government officials, including President Donald Trump, who recently battled coronavirus infection.

Lee wore a mask to the Oct. 12 hearing. He removed it before speaking, which is a common practice among those speaking on Capitol Hill. 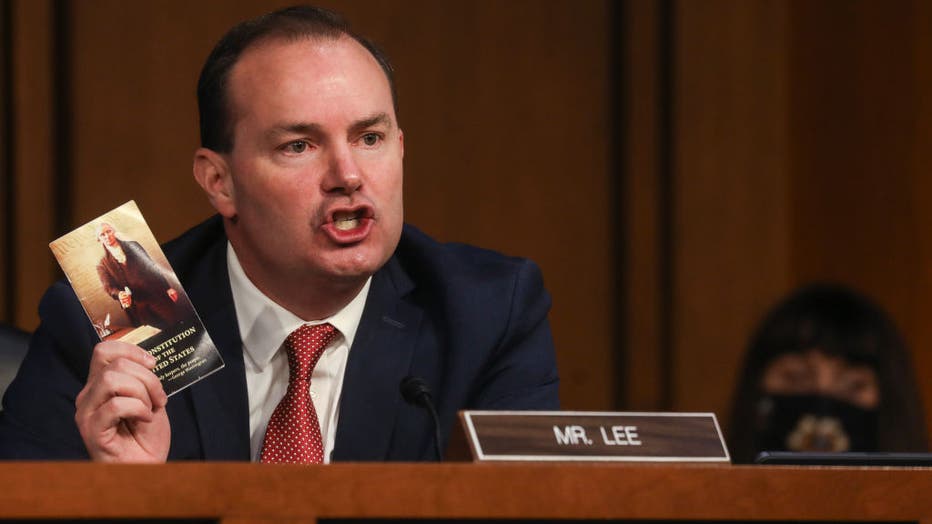 Senator Mike Lee (R-UT) holds up a copy of the U.S. Constitution during the Supreme Court confirmation hearing for Judge Amy Coney Barrett before the Senate Judiciary Committee on the first day of her hearing on Capitol Hill on October 12, 2020 in Wa

Even Fauci, a major proponent of masks, has removed his while addressing Congress.

Even so, Lee drew criticism for attending in person and speaking without a mask after a recent infection. His congressional colleague, Sen. Thom Tillis, tested positive around the same time and was attending the hearing virtually.

In an Oct. 2 tweet, Lee said he tested positive on Oct. 1 and would quarantine for 10 days. In that same statement, he vowed to be back in the Senate in time for Barrett’s confirmation hearing.

"I have spoken with Leader McConnell and Chairman Graham," Lee said, "And assured them I will be back to work in time to join my Judiciary Committee colleagues in advancing the Supreme Court nomination of Judge Amy Coney Barrett in the Committee and then to the full Senate."

Lee said his doctor cleared him to return to the Capitol.

"I’ll be participating in person. I’ve gotten the sign-off from the office of the attending physician," Lee told Hugh Hewitt’s radio program. "I’ve gone through the appropriate number of days, and I’ve been keeping my temperature under control, and I'm no longer contagious."