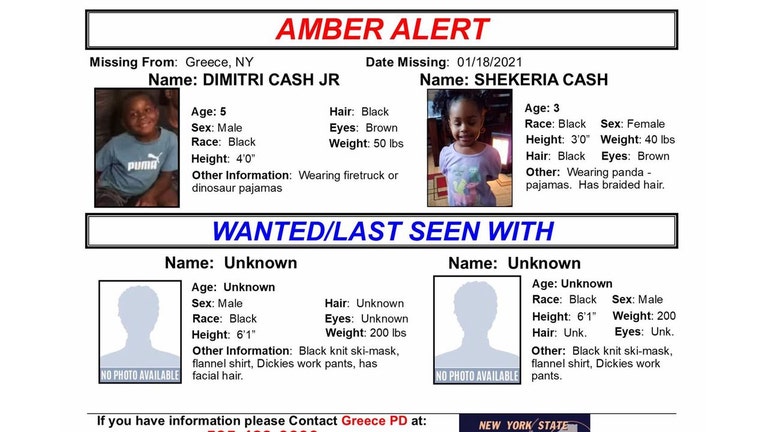 NEW YORK - A pair of men in ski masks broke through a window of a suburban Rochester home, duct-taped a woman and two of her foster children and then fled with two other children: a 5-year-old boy and his 3-year-old sister, police said Tuesday.

Police issued an Amber Alert for Dimitri Cash Jr. and Shekeria Cash after they were abducted in suburban Greece at about 8:40 p.m. Monday, police said.

"They were forcibly removed and we are gravely concerned for their well-being," Greece Police Chief Andrew Forsythe said at a news conference.

The homeowner told police her seven foster children were upstairs when two men broke through a front window. Two children rushed downstairs when she screamed. She held the children and the men wrapped all three of them in duct tape, putting tape over the woman's mouth to keep her from screaming, Forsythe said.

The two men went upstairs and forcibly removed the young children, who were in their pajamas. They fled in the homeowner's van, eventually ditching the vehicle at a nearby apartment complex.

Forsythe called it a "planned, targeted abduction" and pleaded with the public for help in finding the children. He said police want to speak to the children's father and are trying to locate him.

The foster family has had custody of the children for about two years, the chief said.

"We’re acting with that sense of urgency," Forsythe said, "and we’re trying everything we can to locate them."