Whale watcher captured video of a seagull hitching a ride on a sunfish catching some rays off the California coast.

A seagull hitched a ride on a sunfish that was catching some sun off the coast of California on April 16.

Video recorded by whale watchers spotted the pair floating off the coast of Dana Point. The seagull gently nibbled on parasites that were on the fish.

Having birds and other small fish eat parasites off its body is a common practice for sunfish, according to National Geographic. 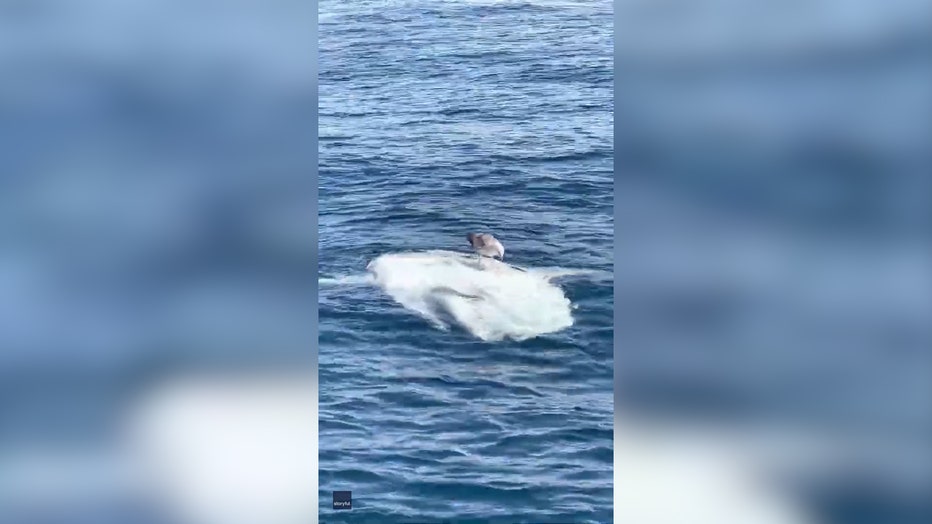 Freeze frame of video that captured a seagull taking a rid on a sunbathing sunfish.

"They will even breach the surface up to 10 feet in the air and land with a splash in an attempt to shake the parasites," National Geographic said.

The tour guide in the video is heard saying that the sunfish, also known as "mola," was one of the biggest she had ever seen.

Donna Kalez, who runs the Dana Point Whale Watching YouTube channel, told Storyful that tour groups typically spot one or two sunfish per trip but this was one was particularly large.

Sunfish are the heaviest of all the bony fish, according to National Geographic. They can reach lengths of up to 14 feet vertically and 10 feet horizontally and can weigh nearly 5,000 pounds.