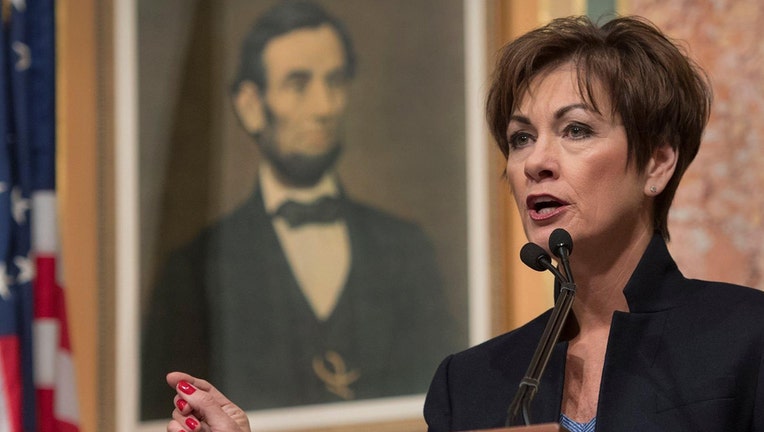 After months of opposition, Reynolds signed an order Monday that requires people to wear masks in indoor public places under some circumstances.

She said she changed course because the state has seen an exponential increase in the number of people hospitalized with the virus this month. She warned that without action, hospitals will be overwhelmed and people will be at risk of not being able to get medical care of any kind.

At a news conference, Reynolds defended exceptions in her mask mandate that public health experts say makes it weak. She said it does not extend to schools because classrooms have not been a major source of virus transmission, and that most districts are already requiring students to wear face coverings.

The mandate only applies when people are within 6 feet of other members of the public outside their households for at least 15 minutes. Reynolds said it was appropriate to target "prolonged personal interaction" given how the virus spreads and said anyone confused should err on the side of caution.

"If you have doubt or aren't sure, I would say wear a mask," she said.

At the same event, however, she seemed to allow for doubts about their effectiveness. She noted that neighboring states with mask mandates, such as Illinois and Minnesota, have seen rising numbers of cases, although not as severely as Iowa.

A reporter asked Reynolds how she would convince mask skeptics, who include many of her political supporters, that they work.

"Oh there's science on both sides and you know that," she said. "If you look you can find whatever you want to support wherever you are at."

Another reporter asked later what she meant by that remark, given the growing scientific consensus that masks provide protection for others as well as those wearing them.

The Centers for Disease Control and Prevention recommends widespread use of cloth masks to reduce the emission of droplets that spread when people cough, sneeze, sing, talk or breathe. The agency says masks are particularly important in preventing asymptomatic people from transmitting the virus, while helping wearers avoid inhaling virus-laden droplets.

Reynolds said she has urged people for months to wear masks if they can't socially distance but that "if you talk to different people there are different studies" on whether they work.

"I do think there is data out there on both" sides, she said.

She said she believes masks are effective as one of many mitigation strategies in place to fight the virus, and she wasn't trying to suggest otherwise.

Her spokesman, Pat Garrett, said later that the governor wasn't referring to specific studies but rather to "Iowans who believe that masks don't work." He said the governor made it "very clear" that's an unacceptable view.

The mask order went into effect Tuesday as Iowa's coronavirus deaths continued to rise, surpassing 2,000 since the beginning of the pandemic.

Iowa marked 1,000 deaths from the virus on Aug. 19, five months after the first. But it took less than three months for the state to reach 2,000 deaths, and the 3,000-mark will be reached far quicker under current trends.

Data from Johns Hopkins University shows that the state has been averaging more than 20 deaths per day over the last week, triple the rate from just two months ago. With hospitals filling up, deaths appear likely to increase further in the short term.

The number of hospitalized patients with COVID-19 in Iowa surged past 1,500 on Monday, more than double the figure from two weeks ago. On Tuesday, the state reported more than 3,500 new infections.