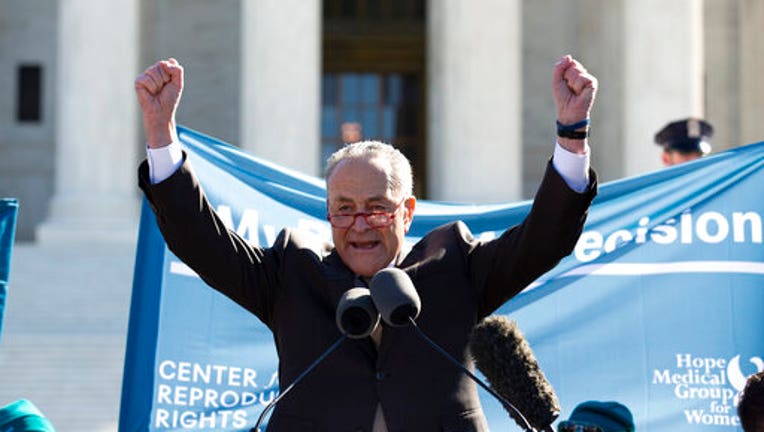 Senate Minority Leader Chuck Schumer, D-N.Y. speaks during abortion rights rally outside of the U.S. Supreme Court in Washington, Wednesday, March 4, 2020. The Supreme Court is taking up the first major abortion case of the Trump era Wednesday, an el

WASHINGTON (AP) — Senate Democratic leader Chuck Schumer said Thursday that he “should not have used the words I used” when he declared at a rally in front of the Supreme Court that two justices would “pay the price” for their decision in an abortion case.

Republicans chastised Schumer for the remark and Chief Justice John Roberts in a rare rebuke said the words were “inappropriate" and “dangerous." Speaking on the Senate floor Thursday, Majority Leader Mitch McConnell, R-Ky., called Schumer's words “astonishingly reckless and completely irresponsible” and said they could have “horrific unintended consequences.” Sen. Ted Cruz, R-Texas, floated the idea of a censure.

Schumer directed the comments at Justices Neil Gorsuch and Brett Kavanaugh while a significant abortion case was being argued at the high court.

“You have released the whirlwind, and you will pay the price. You will not know what hit you if you go forward with these awful decisions,” Schumer said, naming the two appointees of President Donald Trump, according to video of the rally.

Schumer did not back down from the comments on Wednesday evening, with his spokesman criticizing Roberts as not remaining impartial. But Schumer clarified the next morning that he meant political consequences for the justices, not physical ones. He said it was a “gross distortion” to imply otherwise.

“I'm from Brooklyn, we speak in strong language,” Schumer said. “I shouldn't have used the words I did, but in no way was I making a threat. I never, never would do such a thing. And Leader McConnell knows that, and Republicans who are busy manufacturing outrage over these comments know that too.”

He said he made the comments because he feels passionately about protecting abortion rights.

“I feel so deeply, the anger of women all across America,” Schumer said. “About Senate Republicans and the courts, working hand in glove to take down Roe v Wade.”

The dust-up was the latest in a series of politically charged moments around the Supreme Court — and those two justices, in particular. Republicans are still nursing resentments from Kavanaugh's contentious confirmation after he faced decades-old allegations of sexual assault. Democrats are still angry about McConnell's 2016 decision not to confirm a new justice after the death of Justice Antonin Scalia while President Barack Obama was still in office. Trump nominated Gorsuch for that position after he became president.

Schumer spoke for less than four minutes at the rally Wednesday, just as arguments got underway in the first major abortion case since Gorsuch and Kavanaugh joined the court. The Democrat invoked the two justices whose nominations he opposed, giving a thumbs-down gesture to provoke boos from the crowd.

His reference to a “whirlwind” hearkened back to Kavanaugh’s own passionate opening statement at a 2018 confirmation hearing. The judge lashed out at Democrats who had criticized him as the panel reviewed the sexual assault allegations.

“I fear the country will reap the whirlwind,” Kavanaugh said then.

Hours after the rally where Schumer appeared, Roberts issued the statement singling out his comments. “Justices know that criticism comes with the territory, but threatening statements of this sort from the highest levels of government are not only inappropriate, they are dangerous," Roberts said.

It was only the second time the chief justice has responded to criticism of individual judges. In 2018, Roberts rebuked Trump for the president's criticism of an "Obama judge."

But Roberts has otherwise stayed silent, including in recent weeks when Trump questioned the impartiality of Justices Ruth Bader Ginsburg and Sonia Sotomayor, and of U.S. District Judge Amy Berman Jackson, who presided over the trial and sentencing of Trump ally Roger Stone.

Likewise, Senate Republicans did not criticize those comments. McConnell himself came under criticism in August when his campaign tweeted a photo of signs that were shaped as tombstones with names of Judge Merrick Garland, Obama's nominee to replace Scalia, and McConnell's likely 2020 election opponent, Democrat Amy McGrath.

Asked about Schumer's comments, House Speaker Nancy Pelosi said Schumer had said his words were not appropriate, and “I support him on that.”

The justices are weighing a Louisiana law requiring doctors who perform abortions to have admitting privileges at a nearby hospital. A federal judge found that just one of Louisiana's three abortion clinics would remain open if the law is allowed to take effect.

Roberts is expected to be the deciding vote. The court struck down a similar law in 2016, before Kavanaugh and Gorsuch joined the court.