It's the peak of the summer season and whether you are exercising, learning or lounging by the pool, we've got what you need. Consumer reporter Steve Noviello has things you might want to add to your arsenal.

DALLAS - I think my least favorite part of running or biking or even walking outdoors for exercise is the farther you go, the farther you have to go to get back. Yes, I know you can route exercise in a circle but the only way to completely avoid the long road back is to be relegated to the confines of an elliptical or treadmill on which the moment you decide you’re done, you’re already back where you need to be. But that’s boring.

Mind you this ride-home-hurdle didn’t always bother me. I can clearly remember as a kid riding my bike for hours as far as I was allowed. Each day peddling farther to, what seemed at the time to be, the outermost provinces of our development.  Streets usually reserved for cars passed quickly below my peddling feet. I had power and energy to spare.  Now 40-or-so years later, I don’t. Enter the Radio Flyer M880.

For years companies have been pitching their eBikes as story ideas. Maybe it was my fault for just not ‘getting it’ but the idea always kind of struck me as a too-expensive "pick a lane" proposition.  If you can’t bike there on your own peddling power, then don’t. But times have changed (read: two kids a few extra pounds and less energy) and prices have dropped, so when Radio Flyer contacted me about a review I said yes.  For two weeks I rode their bike. Here’s how it went. 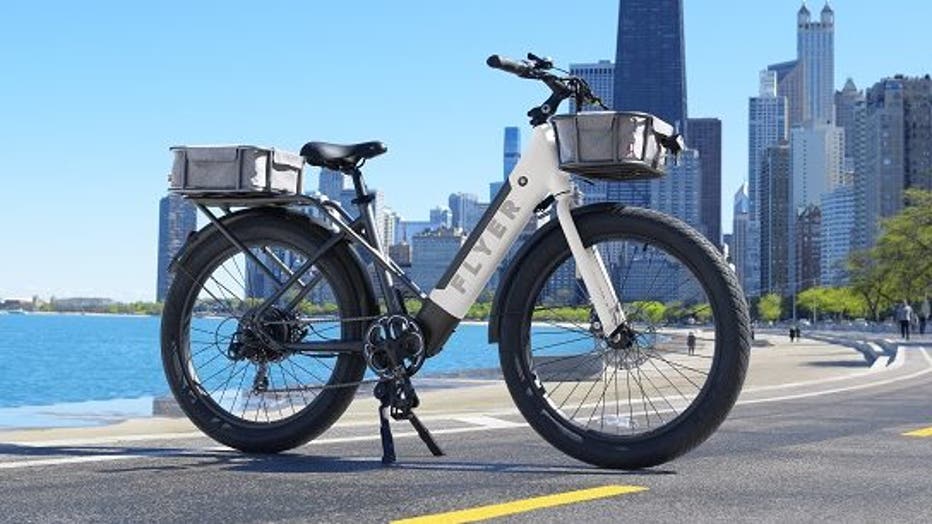 The first thing you’ll notice about the stylish and stout M880 is it looks like a bike.  Remember when hybrid cars first came out with their oddly covered wheels and everyone said "why do they have to make them look ‘like that’?" The M880 looks like a regular bike.  Remove the detachable battery (a feature we will explore more later in this review) and it IS a regular bike.

With four colors to choose from, black, white, blue and red (a nod to Radio Flyer’s iconic red wagon) and a ton of accessories, the M880 is not as large as their L885 which is a longtail better suited for cargo.  Instantly you will notice the generous 3" tire size which tells you this bike is equipped with the extra control and traction to go where you want at greater speeds and for longer periods of time.

The M880 features a lock-and-key detachable battery which I loved way more than I thought I would.  First off, our test ride just so happens to have synced with some of the hottest days on record in Texas.   With temps in the 104-109 range I can only imagine the temperature inside my garage where the bike was stored.  Being able to detach the battery and bring it inside just seemed like a good idea for longevity and for safety.  It also allows you to charge the battery apart from the bike.  This created greater flexibility for charging and allowed the bike to be used in its traditional human-powered mode while the battery was charging – there is no downtime with this bike.  The detachable battery also makes the bike lighter to transport if you’re strapping it to the back of your vehicle for some sort of awesome extreme outdoor adventure (note: I rode the bike to my gym a few miles away which was about as extreme as things got)

There are some choices to be made here.  The M880 can be used as a traditional 7-speed gear shift pedal bike, with 5 levels of electrified pedal assist, or used with battery power only- each of these choices will affect its range.   We started with a modest level one pedal assist (PAS1).  It’s the difference between swinging on a swing by yourself or having someone push you- gently-  and if you’ve ever seen me with my sons at a park you know the mode of choice is "Push me daddy. Higher!".   Instantly it’s just more fun.  It’s subtle at PAS1, with more noticeable boosts in power at PAS2, 3, 4 and the most pronounced jump at PAS5.

There’s something about knowing there is someone (or in this case, something) to pitch in and give you a boost that, from the moment you feel the gentle nudge of the pedal assist, makes you want to ride.  Those aforementioned outer provinces suddenly seemed within reach.   Pedal assist 1 or 2 were the setting of choice.  All levels can be paired with extra throttle which more than lived up to my expectation of getting up hills and enjoying an effortless breeze but also added to how safe this experience was.  I would routinely add power at intersections, after stop signs and when rejoining the flow of traffic after a red light.  Because of the ability to effortlessly ride at speeds up to 20mph, the M880 was a trusted steward to help navigate what might be more precarious traffic snarls had I just had my own two feet with which to power the pedals.   This opened up far more destination options that I anticipated.  It’s also important to note with its integrated LED headlight and taillight, traveling farther and longer is exactly what Radio Flyer intended.

With the battery installed, this is a heavier bike than you’re used to.  There is an argument to be made that added weight, low center of gravity and wide 3" tires improve handling.  The ride is very smooth, except when the road isn’t.  We did notice that potholes and pavement pocks were to be avoided if at all possible.  The accessory water bottle holder, which was installed for us by the company which delivered the bike, fell off so many times due, it seems, to the bumpiness of the road that we stopped reinstalling it.  The bumps aren’t enough to make you want to stop riding, but this is not a super-suspension ride.

Priced starting at just under $1,800 the M880 is a well priced entry into the eBike market with an iconography that can’t be understated.  The dual-purpose intention is instantly apparent making this a great ride for recreation or utility.   If you’re on the fence about why your bike even needs a power boost, we found the M880 was fun and comfortable to ride, and its added power helped swiftly navigate traffic and made formerly out-of-reach destinations part of our new biking routine.