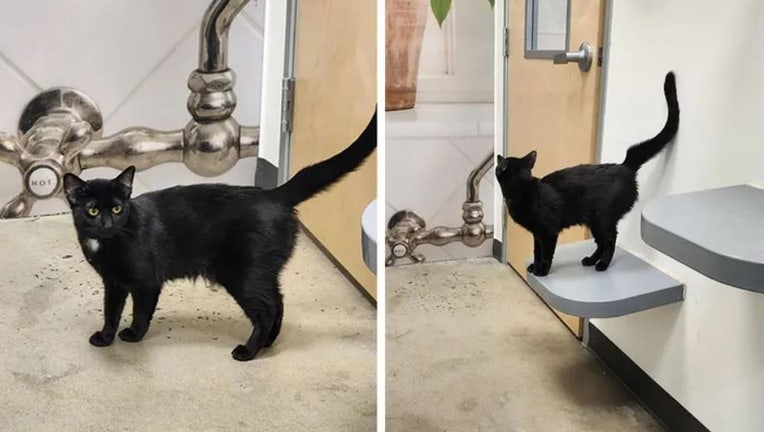 Ellie, a four-year-old black-and-white cat in Virginia, went viral on Twitter for her "sad" life story.

"Y'all. This is the saddest thing I've ever seen," wrote Twitter user @revengegrill on Dec. 12. "This cat was returned to the shelter because she wanted to cuddle her owners at night." (See the tweet lower down in this article.)

The tweet included an image of Ellie, as well as her information sheet.

In the cat's "voice," the sheet says, "I was returned because I wanted to sleep with my human at night and I wasn't allowed to, so I would cry outside the bedroom door."

The tweet was retweeted over 10,000 times and received more than 71,000 likes in just three days. 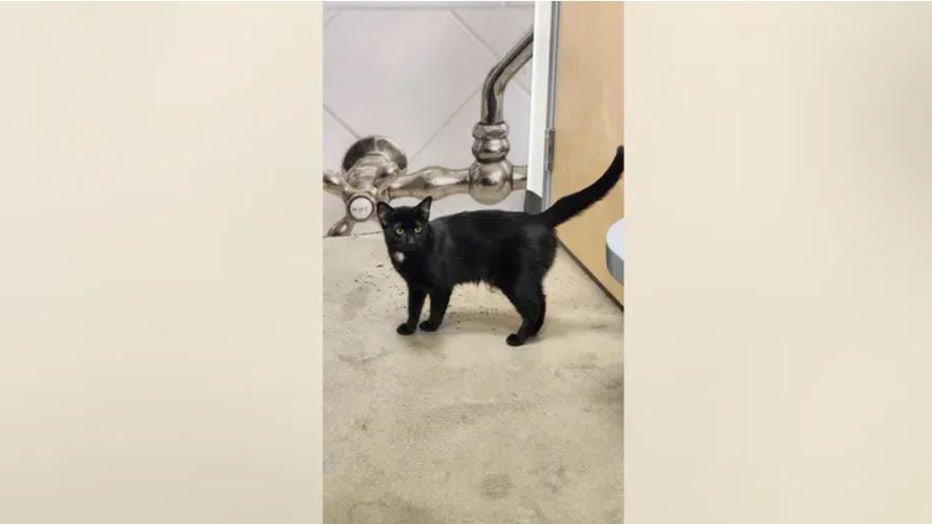 Ellie the cat is pictured here. "This cat was returned to the shelter because she wanted to cuddle her owners at night," wrote a Twitter user. (Meow Stories)

The Twitter user then followed up her tweet by saying that Ellie was at the Chester, Virginia, PetSmart location and that the cat "was literally such a love bug and did nothing to deserve this."

The information sheet notes that Ellie is four years old, has been spayed and has received all her shots.

'GENTLE GIANT' WITH A 'BIG HEART': TUXEDO CAT NAMED AUGUSTUS GLOOP IS UP FOR ADOPTION IN UTAH

She told Fox News Digital in a phone interview that Ellie's viral fame has resulted in about 25 applications to adopt the hard-luck kitty.

She was scheduled to meet potential adopters on Friday, Dec. 16, Balow said, noting she feels confident that Ellie will be going home with one of them.

HURRICANE IAN DISPLACED SCORES OF PETS IN FLORIDA: WHERE ARE THEY NOW?

Ellie originally came to Meow Stories after a shelter in West Virginia was too crowded to accept her, Balow also said. 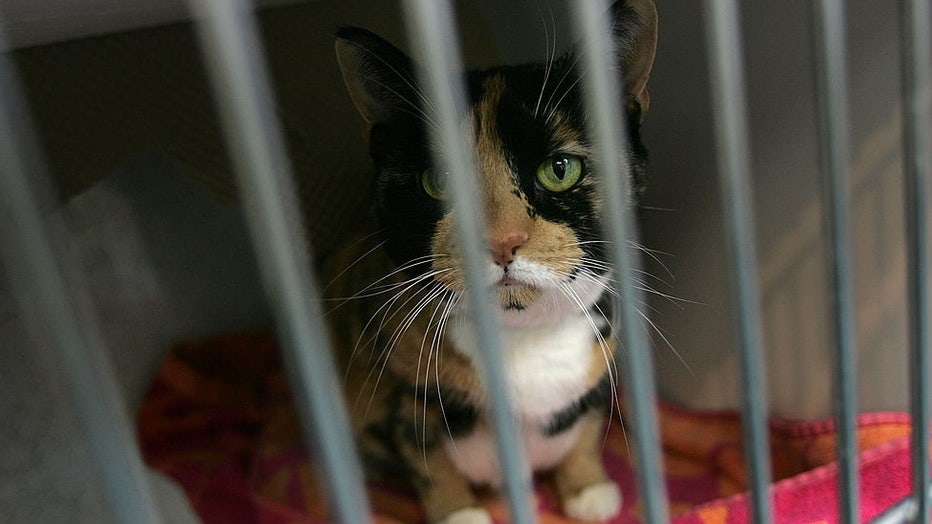 Last August she was adopted, but her adopter then began a relationship with someone who had a cat allergy, she continued.

Ellie was thus banned from the couple's bedroom — something that made her very upset, Balow also said.

So Ellie came back to Meow Stories.

Balow's organization does not have a physical shelter. Instead, it facilitates adoptions with the help of foster families, said Balow.

The group also has a partnership with a local PetSmart to showcase available felines. 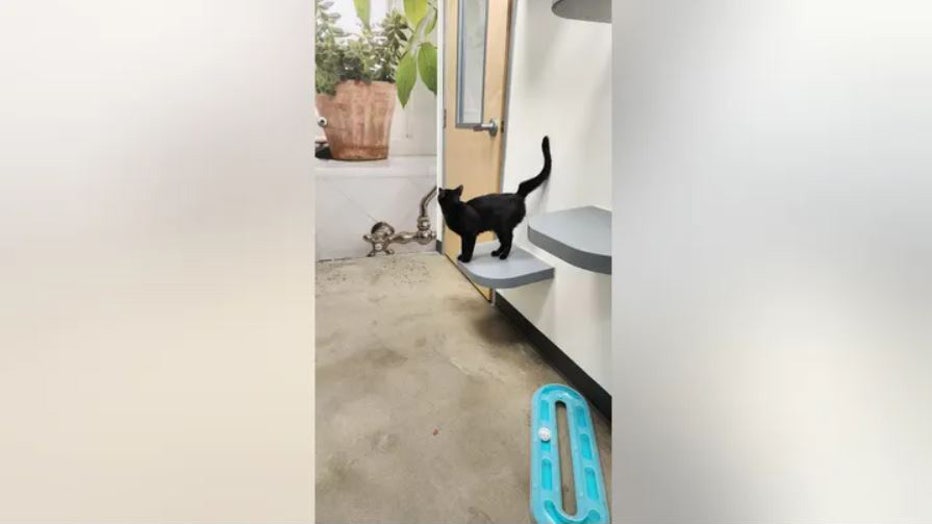 Ellie, pictured above demonstrating her climbing skills, is described as "super friendly" and "really pretty." As of Friday, she already had some potential adopters show interest in her. (Meow Stories)

Ellie was left at the local PetSmart with very little notice, said Balow.

"And so [the former owner] called us and we agreed to take her back. We always take our cats back," she said.

TORTOISESHELL CAT AVAILABLE FOR ADOPTION IN THE HAMPTONS: ‘FULL-FIGURED’ AND LOOKING FOR A LOVING HOME

"And, I mean, the story is really sad because he [the previous owner] couldn't even be bothered to wait for my husband to get to the PetSmart store," Balow recounted.

"He literally ran over there with her in her carrier and left her there with the PetSmart employees until my husband got there."

Meow Stories' website describes the organization as a "nonprofit, all-volunteer, foster-based cat rescue" that was founded in 2009.

"Meow Stories specializes in cats and kittens coming from underserved rural shelters across Virginia mainly below the I-64 corridor and private rescuers in these areas as well as several rural shelters" in West Virginia, North Carolina and Tennessee, the site notes.

For Balow, it's all about finding the perfect homes for needy cats.

"We are a small, efficient rescue. We don't do a lot of advertising or marketing," she said. "I'm not about my ego." 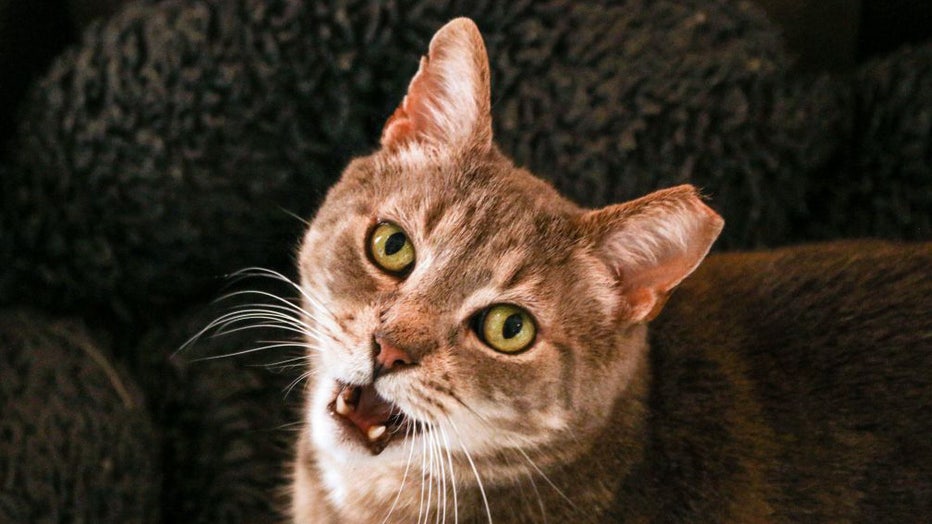 FILE-A different cat is pictured from its bed at the Humane Rescue Alliance shelter. (ANNA-ROSE GASSOT/AFP via Getty Images)

Her organization facilitates about 1,000 adoptions per year, with cats coming in from surrounding states as well as from all over the world, she said.

Recently, she received a number of cats from a rescuer in Kuwait, she added.

Running her organization with foster families means that most of the cats are adopted within two weeks, said Balow.

Ellie herself was surrendered about a week before she achieved viral fame on Twitter.

To prevent future situations such as Ellie's, Balow advises that potential cat adopters focus more on the personality of their future cat, rather than specific characteristics such as fur length, breed or color.

"Never, never go by the looks of the cat" when choosing a furry friend, she said.

She also said, "And you really should think long and hard about the personality that you want, what fits into your lifestyle," she said.

As for Balow herself?

She has a soft spot for cats with special needs.

"I know there's a lot of people that go by breeds. I like the ‘imperfectly perfect’ ones," she said.