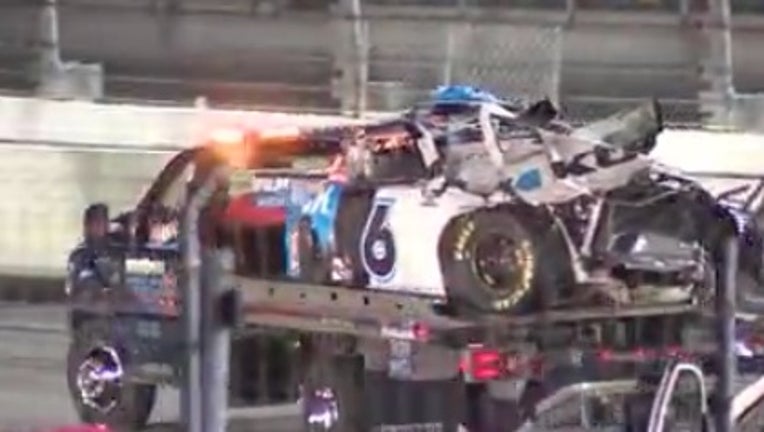 DAYTONA BEACH, Fla. - After being towed off the track on a flatbed truck, Ryan Newman’s crumpled number six car was hauled back to Concord, North Carolina.

It's headed for NASCAR’s Research and Development facility to be studied.

“Kind of like and NTSB investigation... take that mindset and go find anything and everything they can to make the car safer,” said Andy Petree, competition director for Richard Childress Racing.

He used to work with Newman.

Petree says his old friend will likely have some input too.

“I’ve known Ryan a long time. He is one of the smarter drivers out there. He does have that engineering mind and always thinking about safety because he’s the one sitting in there,” Petree said.

Monday night's wreck at the end of the Daytona 500 isn’t the only horrific crash Newman has been involved in.

He’s actually got a roll bar named after him after rollover incident at Talladega back in 2009.

“The front of the roof actually came down some so they added another payload bar, so there’s two of them in the upper windshield area. That’s made the car a lot tougher in that particular area of the car in those rollover accidents and then post rollover impact,” Petree said.

He anticipates that NASCAR will also be looking closely at the damage to Newman’s driver’s side door.

“It’s a very sensitive area for impact because like I said, 'you can’t predict every kind of crash.' This one was upside down and then another impact after that from the front of another car to that driver’s area with the car inverted,” Petree said.

As NASCAR continues to make cars safer, drivers continue to push the limits.

He says NASCAR’s Research and Development team takes its time and is very thorough in going over cars after serious wrecks to see what held up and what didn’t, so race fans should not expect answers anytime soon.