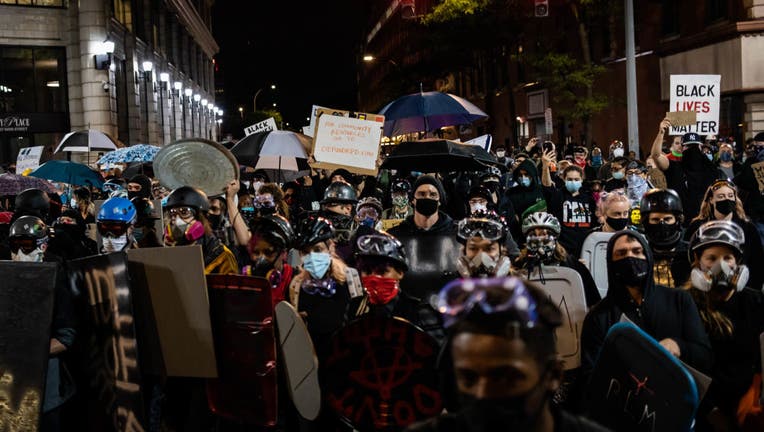 Protesters march for the sixth consecutive night of protest following the release of video evidence that shows the death of Daniel Prude. (Photo by MARANIE R. STAAB/AFP via Getty Images)

ROCHESTER, N.Y. (AP) - A Rochester man previously arrested during a protest over Daniel Prude's death is now accused by federal prosecutors of posting incendiary messages and instructions to make a Molotov cocktail.

The U.S. Attorney’s Office in western New York on Friday charged Ryan Howe of Rochester with intending to incite a riot by making provocative Facebook posts earlier this week. The posts came after a grand jury in Louisville declined to charge police officers in the killing of Breonna Taylor.

The charges come as U.S. authorities aggressively pursue federal charges against protesters. President Donald Trump has vowed to use federal powers to crack down on unrest.

Two other men face federal civil disorder charges related to protests in Rochester since video was released this month of Prude handcuffed and naked with a spit hood over his head as police restrained him. Prude was taken off life support a week after the March 23 incident.

Prosecutors cite Facebook postings Wednesday and Thursday in charging Howe with trying to incite a riot. One post mentioned burning things to the ground.

Prosecutors said Howe had been arrested by Rochester police for inciting a riot and resisting arrest on Sept. 2, the day Prude video was released.

Howe was being held pending a detention hearing Wednesday. The charges carry a maximum penalty of 5 years in prison and a $250,000 fine.

An email seeking comment was sent Saturday to his federal defender.

The complaint said that when FBI agents showed Howe the Molotov cocktail post, he said it was a mistake and deleted it. He said he wanted law enforcement to be defunded and ultimately abolished, but he did not want to see anyone harmed.