A Harlem deli had to close its popular sandwich counter for four days after the workers were beaten and threatened by a group of thieves who ransacked the store.

NEW YORK - A group of robbers threw kitchen knives, store products, and even a food display rack at two deli workers in Manhattan, causing thousands of dollars in damage.

The NYPD says it happened last Wednesday inside Eleganza Gourmet Deli located at 1 Convent Avenue, in Harlem.  Three people went into the deli around 3 p.m.

They reportedly first asked for store credit.  When they were denied they then demanded money from two men who were working in the store.

They then started throwing items at the men, including the kitchen knives.

One of the deli workers suffered a bruise in the assault.

He says the attackers used ethnic slurs during the incident.

3 people threw food racks and other items at 2 deli workers during a robbery attempt.

Jose Tapya says, "I saw them take the knives, the big knives and he started throwing, throwing toward me. I just protect myself."

In the chaos, another worker tried calling 911.  They chased him into the street.

One of the owners of the deli says they are simply trying to make a living.

He was thankful that none of the workers had their children in the store at the time of the attack.

The New York City Police Department is asking for help in identifying three people shown in a video that was released on Monday.  It was unclear if anything was stolen from the store. 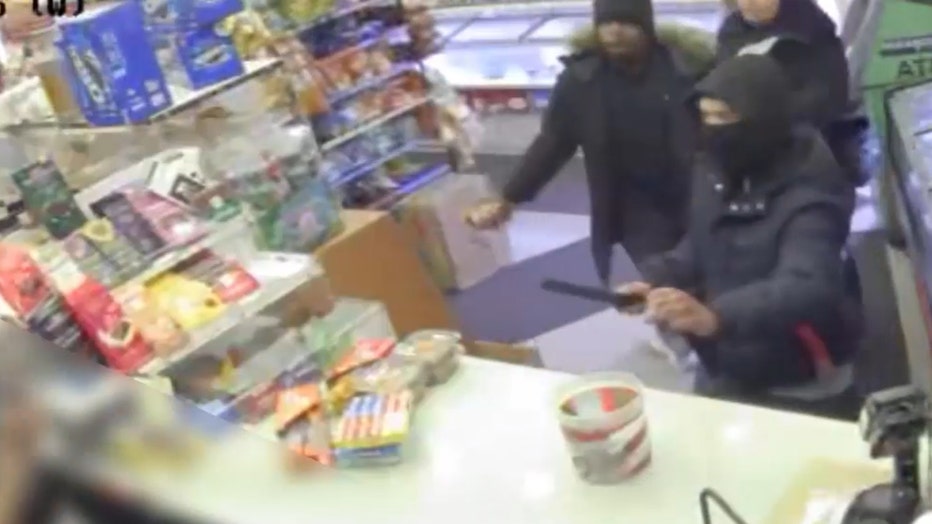 3 people are wanted for an attempted robbery of Eleganza Gourmet Deli.