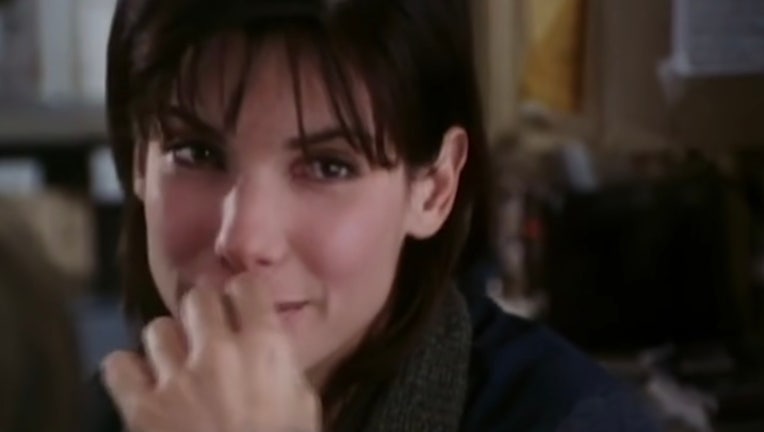 Sandra Bullock in While You Were Sleeping (Screenshot: YouTube).

"While You Were Sleeping" is an underrated holiday classic — a Christmas rom-com with festive cheer but one that doesn’t lean into the holiday spirit so much that it becomes full-on treacly.

Sure, the 1995 romance has its weird side. It centers on Lucy (Sandra Bullock), a fare token collector from Chicago who saves her handsome crush when he falls onto the tracks and then inadvertently winds up pretending to be his fiancée when he falls into a coma.

But "While You Were Sleeping" is also honest about the pain of loneliness and the difficulty of going through life without family (or found family) by your side.

In addition to the love triangle between Lucy, her fake fiancé Peter Callaghan (Peter Gallagher) and his brother Jack (Bill Pullman), "While You Were Sleeping" is just as much a love story between Lucy and the entire Callaghan clan. Plus it features some of the comfiest looking knitwear ever captured onscreen.

To celebrate this holiday rom-com favorite, here are the movie’s five coziest moments.

To ensure Lucy doesn’t come across as too creepy, "While You Were Sleeping" wisely gives her an ally in Saul Tuttle (Jack Warden), a long-time family friend of the Callaghans and Peter’s Jewish godfather. Though Saul learns early in the film that Lucy is lying, he realizes she’s only doing it because she’s lonely and needs help, not because she’s trying to take advantage of anyone. In this sweet scene, Saul opens up to Lucy about the pain of losing his wife and how much the Callaghans helped him by taking him in as part of their family. It’s the moment he and Lucy first start to bond as kindred spirits.

RELATED: Radio City Rockette: A day in the life of a dancer in America’s most popular holiday show

This is where things really get dreamy. When their truck gets parked in, Lucy and Jack decide to walk back to her place. Along the way, they open up about their dreams, stroll the gorgeous Chicago Riverwalk and — once they’re back at Lucy’s — share an absolutely adorable slip and slide on the frozen courtyard outside her apartment. Bullock and Pullman’s chemistry is off the charts, and the whole sequence is rom-com magic.

One thing "While You Were Sleeping" absolutely nails is the dynamics of a big, loving family — one where everyone constantly talks over one another. In this brief but incredibly charming dinner table scene, conversations about Cuba, tall actors and pot roast all get jumbled together into one big mess as Lucy and Jack share a secret laugh about his goofy family.

Indeed, it’s the family element that really elevates "While You Were Sleeping." In fact, one of the movie’s sweetest little scenes doesn’t involve romance at all. At Lucy’s suggestion, Jack finally opens up to his dad Ox (Peter Boyle) about the fact that he doesn’t want to go into the family estate furniture business because he wants to make and sell his own bespoke wood furniture instead. Though Jack has been dreading the conversation, his dad takes it better than he ever could’ve hoped and the whole sequence becomes a lovely, low-key father/son bonding breakfast.

RELATED: The Ukrainian history of 'Carol of the Bells'

Naturally, in a rom-com like this, the big lie must eventually be exposed. But what makes this scene special, rather than contrived, is Bullock’s earnest, heartfelt performance. You really feel Lucy’s pain as she tries to explain how she got caught up in such a strange scenario. "l went from being all alone to being a fiancée, a daughter, a granddaughter, a sister and a friend," Lucy notes. "You allowed me to be a part of your family, and l haven’t had that in a really long time."

"While You Were Sleeping" is the movie that made Bullock a rom-com queen, and this is the poignant scene where she fully earned her crown. And the good news is, if you don’t get to it in time for Christmas, it’s also a great New Year’s watch too.