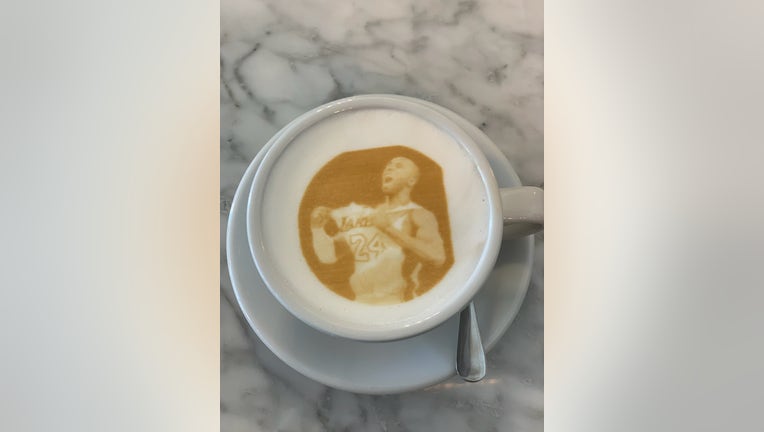 VENTURA, Calif. - As many people across Southern California and around the world continue paying their respects to former NBA superstar Kobe Bryant, many fans have gathered at a Ventura coffee shop and restaurant where unique drinks honoring the basketball legend are being served up.

With the help of modern technology, Immigrant Son Caffé on Main Street in Ventura is imprinting images of Kobe and his daughter onto customers' coffee orders.

The restaurant's co-owner Alessandro Tromba says soon after Kobe's passing, customers of all ages began sending the business thousands of images of Kobe Bryant. The restaurant is equipped with a special machine Tromba calls the "Ripple Maker," which has the ability to burn any image onto a cup of coffee. Through a smart device app associated with the machine, customers can upload their own images.

Tromba says the sheer volume of customers requesting Kobe images in their coffee orders is a huge testament to what a great person Kobe was.

Kobe Bryant was killed in a helicopter crash in Calabasas on Sunday along with his 13-year-old daughter Gianna and seven others. The National Transportation and Safety Board is investigating.

Tromba says the restaurant was very busy when the news broke of Kobe's death and a wave of sadness overcame everyone at the restaurant that day, but as much as it hurt, everyone tried to help each other cope with such a terrible tragedy.