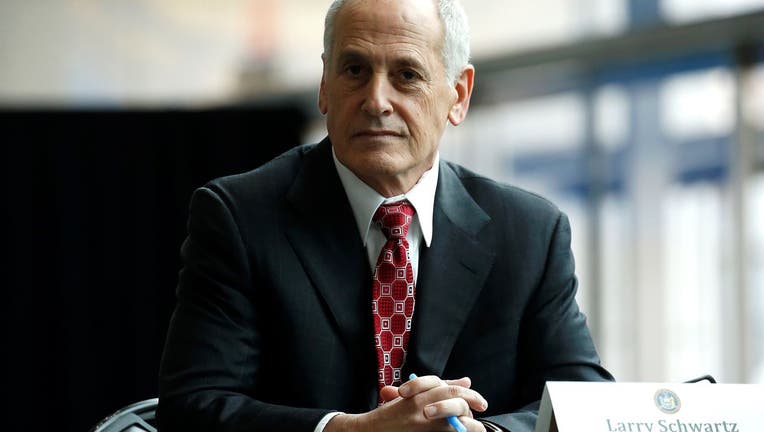 NEW YORK - Governor Andrew Cuomo's "vaccine czar" allegedly called county officials in New York over the last two weeks to gauge their loyalty to Cuomo amid the ongoing investigation into sexual harassment claims against him.

The Washington Post reported Sunday that an unnamed Democratic county executive told the state attorney general's office they intend to file an ethics complaint regarding a call from longtime Cuomo advisor Larry Schwartz.

"At best, it was inappropriate," the executive told the Post. "At worst, it was clearly over the ethical line."

The executive said they feared the county’s vaccine supply could suffer if the executive did not indicate support for Cuomo, the Post reported.

Schwartz served as secretary to the governor from 2011 until 2015 and has advised Cuomo off and on since then. He returned last spring to assist the administration with the response to the coronavirus pandemic.

Schwartz, who is working in a volunteer capacity to run New York’s vaccine distribution, acknowledged making the calls to county executives, but told the Post he did not discuss vaccines in the conversations.

"I did nothing wrong," Schwartz told the newspaper. "I have always conducted myself in a manner commensurate to a high ethical standard."

But the phone calls could raise questions about an intermingling of politics with the state’s coronavirus response.

"People do not see calls coming from the governor’s mansion as somebody wearing one hat and then putting on another hat," Arthur Caplan, director of medical ethics at the NYU Grossman School of Medicine, told the Post. "If you are in control of a vital supply of a lifesaving resource like vaccines, you are carrying an enormous amount of implicit clout when you ask for political allegiance."

Gov. Cuomo refusing to step down

The pressure is on for Andrew Cuomo, but the embattled governor continues to refuse to step down from office.

Cuomo is facing allegations that he sexually harassed or behaved inappropriately toward six women, including several former staffers. He has denied touching any women inappropriately.

The three-term governor has rejected calls for his resignation from fellow Democrats, including New York’s two U.S. senators, Chuck Schumer and Kirsten Gillibrand, and has asked New Yorkers to await the results of an investigation headed by state Attorney General Letitia James.

Schwartz told the Post that the calls he made to assess political support for Cuomo were distinct from the role he plays in the vaccination effort.

"I did have conversations with a number of County Executives from across the State to ascertain if they were maintaining their public position that there is an ongoing investigation by the State Attorney General and that we should wait for the findings of that investigation before drawing any conclusions," he wrote in an email.

Beth Garvey, acting counsel to the governor, said in a statement emailed to The Associated Press through a Cuomo spokesperson on Sunday that any assertion Schwartz "acted in any way unethically or in any way other than in the best interest of the New Yorkers that he selflessly served is patently false."

"Larry answered our call to volunteer in March and has since then worked night and day to ‎help New York through this pandemic, first managing surge capacity, and procuring necessary supplies for the state, setting up the contact tracing efforts, and now assisting with vaccine distribution," the statement said.