A new company launching in New York City wants to make sure you never get caught in the rain without an umbrella.

NEW YORK - Car share, scooter share, home share. And now another sharing service you may not have thought you needed — umbrella share. The so-called sharing economy has produced a company that wants to lend you a free umbrella to use for a day.

So no more buying a spring-loaded umbrella for $3 from a sidewalk vendor when you're caught in an unexpected downpour. (You know that poorly made umbrella will end up in the trash or a gutter after a few gusts of wind.)

Brazil-based Rentbrella has installed nearly three dozen kiosks — which it calls umbrella-sharing stations — in high-traffic areas in Manhattan. The company is looking to install as many as 300 kiosks across the city this year, according to a news release.

Here is how it works. First, you download an app (of course). Then you can locate an umbrella station near you. Once there, you grab an umbrella and can use it for free for up to 24 hours. You can return the umbrella to any Rentbrella station.

If you keep it for more than 24 hours, you'll be charged a $2 fee per day for Days 2 and 3. But if you still fail to return the brolly by the end of the third day — or if you just want to keep the logo-ed umbrella — you'll be charged $16.

The company said the umbrellas were "developed specifically for New York's climate." 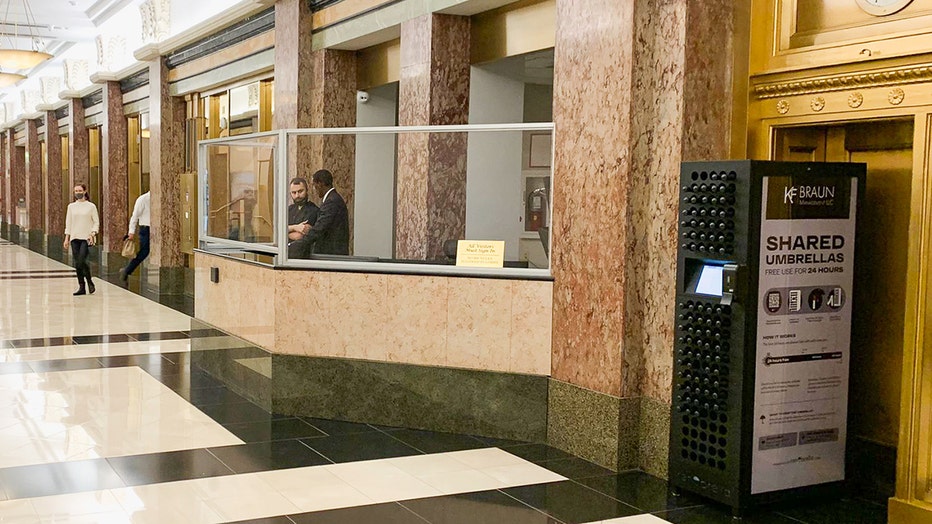 A Rentbrella umbrella kiosk in the lobby of a building in Manhattan. (Photo Courtesy of Rentbrella)

"Through extensive research, Rentbrella produced umbrellas that use state-of-the-art hydrophobic material, feature UV protection capabilities and are made from fiberglass which provides extra shielding from strong winds," the press release said.

(Hydrophobic means that it repels water, which seems mandatory for an umbrella?)

Rentbrella, which bills itself as a mobility and technology company, launched in São Paulo, Brazil, in 2018 and now has more than 400 locations across the city. The company said 98% of Rentbrella usage there is free.

"Our goal is to make life easier for people across the city and not to have to worry about the weather," co-founder Freddy Marcos said. "We are happy to offer this free service to users and bridge a relationship between them and our partners."

(The umbrellas feature space for advertising.)

You can check out the details at Rentbrella.