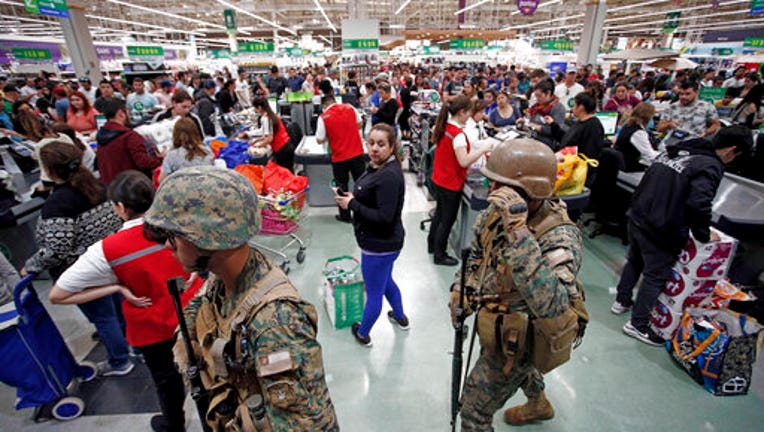 Military police stand guard at a supermarket as customers are pay for their groceries, in Santiago, Chile, on Monday, Oct. 21, 2019. Chile's capital seemed to return to calm Monday after three days of protests and acts of vandalism sparked by a rise

SANTIAGO, Chile (AP) — Hundreds of protesters are defying an emergency decree to confront police in Chile's capital, continuing disturbances that have left at least 11 dead and led the president to say the country is "at war."

Police used tear gas and streams of water to break up protests on one of Santiago's main streets Monday.

Meanwhile, many people lined up before supermarkets that had reopened. Many were still closed after a weekend that saw scores of stores looted or burned.

Only one of the city's six subway lines was operating because rioters had burned or damaged many of the stations.

President Sebastián Piñera said Sunday that the country is "at war with a powerful, relentless enemy that respects nothing or anyone and is willing to use violence and crime without any limits."