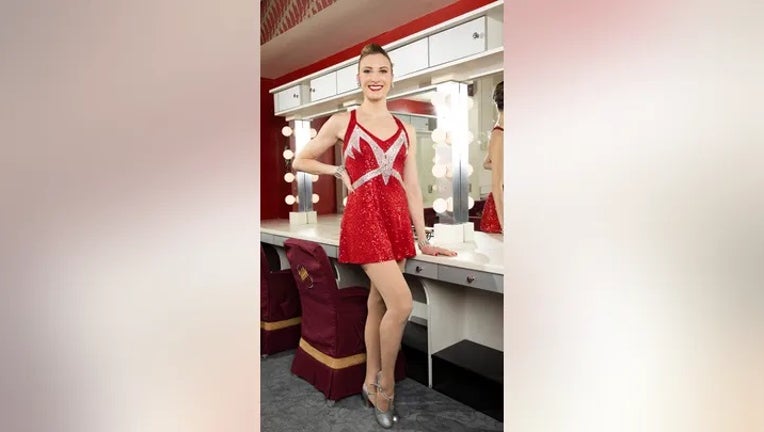 Grooms Hoge has been dancing since she was three years old. She knew she wanted to be a Radio City Rockette after she saw a performance at age 11. (MSG Entertainment)

The Radio City Christmas Spectacular featuring the Rockettes is on its 89th season at Radio City Music Hall in New York City.

From their iconic toy soldiers' routine to their reindeer costumes, the Rockettes are one of the most recognizable professional dance groups in the world.

During the holiday season, the Rockettes can perform up to four shows a day — kicking up to 160 times per show.

QUIZ! ROCKETTES' CHRISTMAS SPECTACULAR: HOW MUCH DO YOU KNOW ABOUT THE ICONIC SHOW?

Sarah Grooms Hoge is a 14-year Rockette veteran who is originally from Columbus, Ohio.

In an interview, Grooms Hoge revealed not just her background, but a typical day in the life of a Rockette. 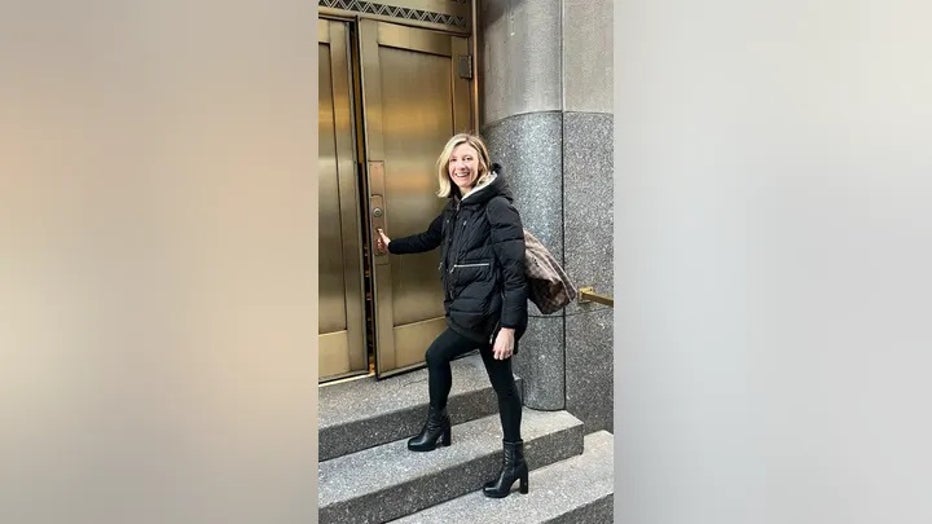 Grooms Hoge said she is a morning person and loves to get up bright and early before a long day of performances. (MSG Entertainment)

"I’ve been dancing since I was three years old, and I’ve been a Rockette for 14 seasons," she said.

"It’s what I love to do. It’s what I’m passionate about."

After coming to New York at just 11 years old to see her first-ever dance teacher perform as a Rockette, Grooms Hoge said she knew that’s what she wanted to do as well.

"I knew from that moment on, being a Rockette is what I really wanted to do," she said.

The Ohio native auditioned for her first season just days before her high school graduation.

She got the call shortly afterward that she had gotten the job — and knew she'd be changing her post-graduation plans and moving to New York City. 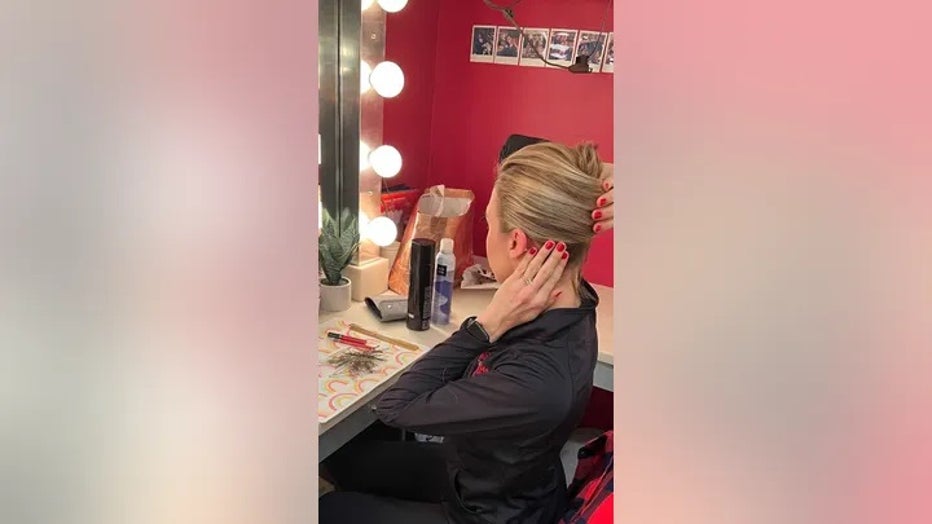 Grooms Hoge spends time getting ready in the Rockettes' dressing room before each performance. (MSG Entertainment)

"My world was changed forever," she said.

Grooms Hoge said her typical day reflects what the show schedule looks like that day.

The Rockette is one of 84 members and is in the early-morning matinée cast — meaning she starts her day bright and early.

"I’m a morning person. So, wake up, make some breakfast, make some coffee at home, pop those headphones in on [the] subway, ride the train to work and then sit in our dressing rooms and get ready," she said.

Grooms Hoge typically gets to the iconic Radio City Music Hall an hour and a half before her first show of the day — saying she loves catching up with the other performers in the dressing room.

The performers each do their own hair and makeup — including the famous "twist" hairstyle that Grooms Hoge said she can do pretty quickly at this point.

From there, the performer said she and every other Rockette must warm up before the show.

"Sometimes that’s like doing a little pre-morning ballet bar or yoga," she said.

"Something to get your heart rate up and doing some cardio."

After warming up and reading her notes given from the last performance — it’s showtime. 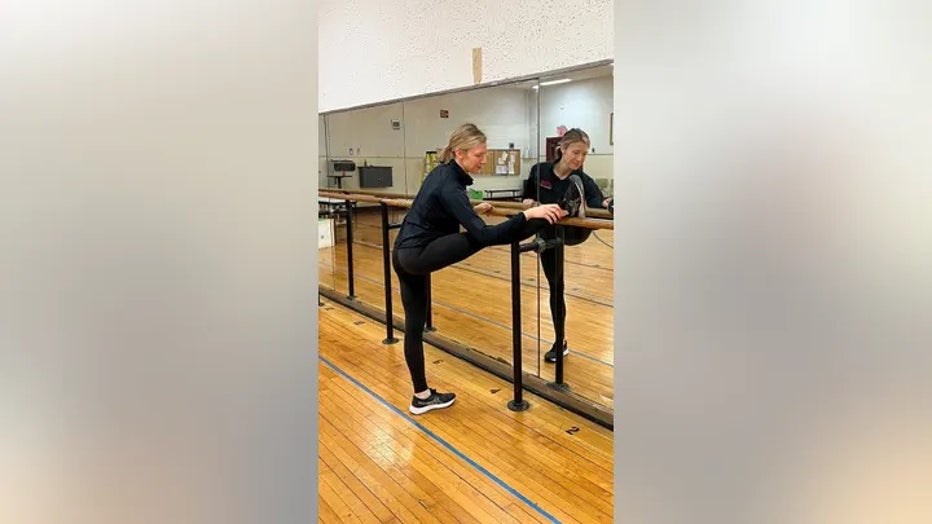 The Rockette said she gets to Radio City Music Hall about an hour and a half before the curtain rises — enough time to get ready, warm up and catch up with other dancers. (MSG Entertainment)

The Radio City Christmas Spectacular runs for 90 minutes. It includes nine numbers by the Rockettes — an extra number was added to the lineup in 2021.

Between shows, Grooms Hoge said some performers eat a snack, take a nap or simply recover before the next show.

"You always have to make sure you’re taking care of your body because we do anywhere from 15 to 17 shows in a week per cast," she said. 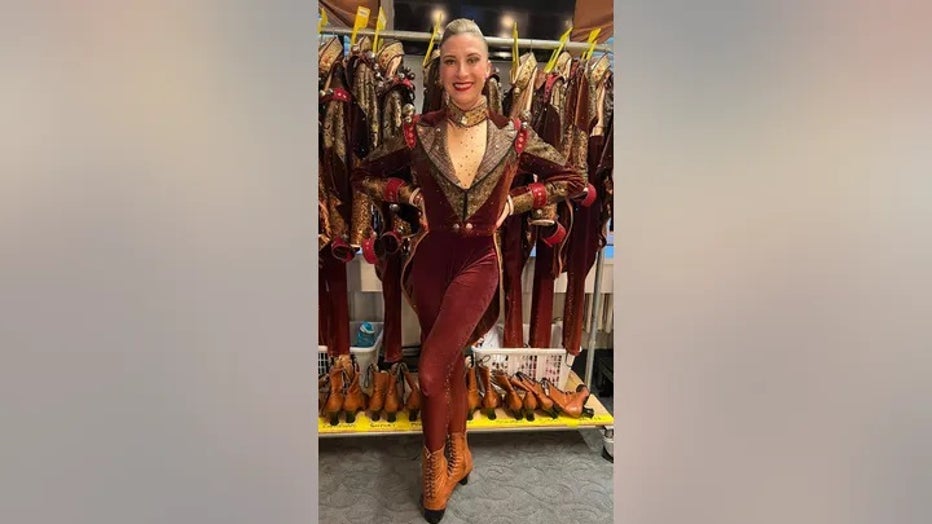 Grooms Hoge, 35, is in her 14th season as a Rockette and said she still loves it as much as she did on day one. (MSG Entertainment)

When the performances are done for the day, Grooms Hoge said she typically takes an ice bath or gets a massage to help flush out her legs after the long day.

"Then, wake up and do the whole thing again tomorrow," she said with a smile.

In the off-season, Grooms Hoge said she goes to school, working toward a bachelor's degree in liberal arts from the Harvard Extension School while teaching fitness and dance as well.

"I absolutely love what I do and [am] so, so fortunate to be so passionate … and have this lifelong love for dance and movement and specifically, the Rockettes."