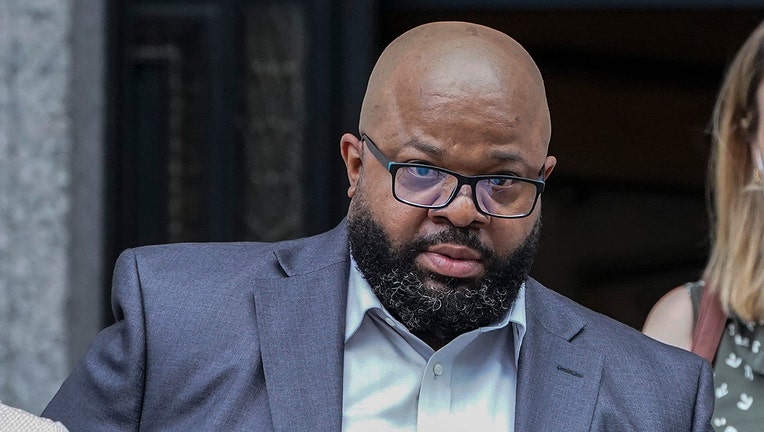 NEW YORK - A self-described manager and adviser to R. Kelly pleaded guilty Tuesday to an interstate stalking charge, less than a week after he was convicted of making a phone threat that gunfire was about to occur in a Manhattan theater where a documentary about the singer was about to be shown.

"When his initial effort failed, he continued his vile campaign by sending threatening messages to Jane Doe and her mother, and publishing explicit photos of the victim on the internet before and after Kelly was indicted," Peace said in a statement. "As this prosecution makes clear, the defendant’s conduct was not only reprehensible, but it was also criminal and will not be tolerated."

Russell "repeatedly and purposefully" tried to stop the witness from speaking out, according to Homeland Security Investigations Acting Special Agent-in-Charge Ricky Patel.

"Despite multiple threats, Russell ultimately failed in his efforts and will now face the consequences of his despicable behavior," Patel said in a statement. "HSI will continue to work together with our partners to support and empower survivors of abuse and exploitation to come forward and speak out against their abusers."

Russell could face up to five years in prison at a Nov. 17 sentencing.

Prosecutors said the harassment campaign stretched from November 2018 to February 2020 after the woman filed a civil lawsuit against Kelly.

"Specifically, Russell threatened to reveal sexually explicit photographs of Jane Doe and to publicly reveal her sexual history if she did not withdraw her lawsuit against Kelly and 'cease her participation and association with the organizers' of a 'negative campaign' against Kelly. In November 2018, Russell caused a letter, with attachments, purportedly written by Kelly to be mailed to Jane Doe's Brooklyn-based lawyer at the time," federal authorities said in a news release. "The attachments included cropped nude photographs of Jane Doe with the following text: 'the next two pictures have been cropped for the sake of not exposing her extremities to the world, yet!!!' In December 2018, Russell, using his alias 'Colon Dunn,' sent a series of text messages to Jane Doe and her mother, which contained the same photographs of Jane Doe, and stating, 'Just a sample. We will seek criminal charges. You've been warned[.]'"

A U.S. district court judge in Brooklyn sentenced R&B star R. Kelly to 30 years in federal prison for his conviction on racketeering charges related to shocking and lurid accusations of exploiting, coercing, and sex-trafficking several young women and girls.

The jury concluded that Russell made a phone threat that forced the evacuation of a theater where Lifetime's "Surviving R. Kelly" series was to be shown, and a panel discussion was to occur featuring several women in the documentary.

Prosecutors argued during the one-week trial that Russell was trying to protect the lucrative career of Kelly, a Grammy-winning, multiplatinum-selling songwriter.

A trial witness had testified that a man with a deep voice had called the theater to warn that "someone had a gun and they were going to shoot up the place." Prosecutors said the call was placed to the theater from Russell's home on a day when Russell made nine phone calls to the theater to try to stop the airing of the documentary.