Very few of those charged appear to be affiliated with highly organized extremist groups, and many are young suburban adults from the very neighborhoods Trump vows to protect from the violence in his reelection push to win support from the suburbs.

Attorney General William Barr has urged his prosecutors bring federal charges on protesters who cause violence and has suggested that rarely used sedition charges could apply. And the Department of Justice has pushed for detention even as prisons across the U.S. were releasing high-risk inmates because of COVID-19 and prosecutors had been told to consider the risks of incarceration during a pandemic when seeking detention. 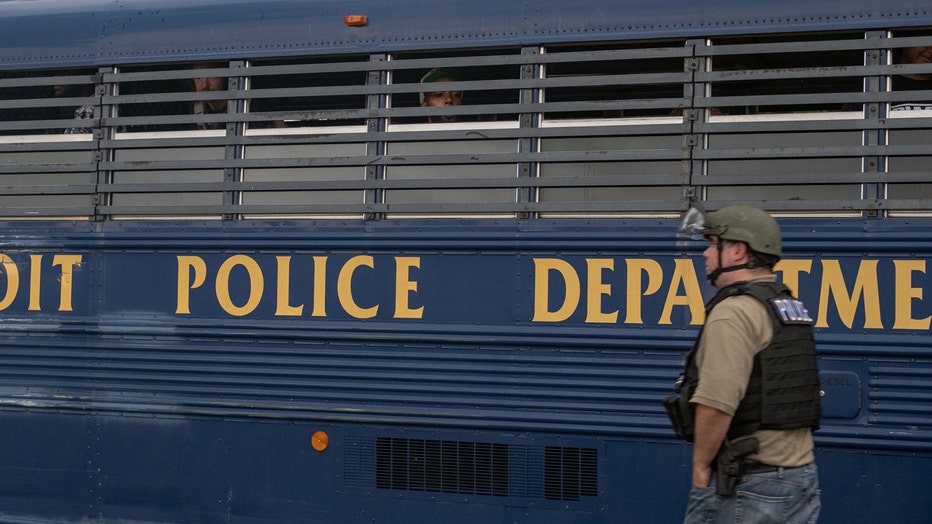 Non-violent protest organizers of 'Detroit Will Breath' were detained by Detroit police during a march against police brutality near Detroit's west side, where 20-year-old Hakeem Littleton was shot and killed by Detroit Police earlier in the day Frid

Defense attorneys and civil rights activists are questioning why the Department of Justice has taken on cases to begin with. They say most belong in state court, where defendants typically get much lighter sentences. And they argue federal authorities appear to be cracking down on protesters in an effort to stymie demonstrations.

“It is highly unusual, and without precedent in recent American history,” said Ron Kuby, a longtime attorney who has represented scores of clients over the years in protest-related incidents. “Almost all of the conduct that’s being charged is conduct that, when it occurs, is prosecuted at the state and local level,” he said.

Not to say there hasn’t been violence. Police cars have been set on fire. Officers have been injured and blinded. Windows have been smashed, stores looted, businesses destroyed.

Some of those facing charges undoubtedly share far-left and anti-government views. Some have criminal records and were illegally carrying weapons. Others came to the protests from out of state. Some are accused of using the unrest as an opportunity to steal or create havoc.

But many have had no previous run-ins with the law and no apparent ties to antifa, the umbrella term for leftist militant groups that Trump has said he wants to declare part of a terrorist organization.

Even though most of the demonstrations have been peaceful, Trump has made “law and order” a major part of his reelection campaign, casting the protests as lawless and violent in mostly Democratic cities he says have done nothing to stymie the mayhem. Trump has argued that some cities have refused to properly clamp down on protesters, so the federal government has to step in.

The government has pushed in scores of cases to keep the protesters behind bars while they await their trials amid the COVID-19 pandemic that has killed more than 210,000 people across the U.S.

In Texas, Federal Magistrate Judge Andrew Austin repeatedly challenged the prosecutor to explain why Cyril Lartigue, who authorities say was found with the materials to make a Molotov cocktail in his backpack, should be behind bars while he awaits his trial. Lartigue, of Cedar Park, described his actions that night as a “flash of stupidity,” prosecutors said. Letters filed with the court from friends and family members describe him as a caring and honest man.

The 25-year-old lives with his parents in the Austin suburb and had never been in trouble with the law before and wasn’t a member of a violent group.

The judge said there are a lot of people “who do something stupid that’s dangerous that we don’t even consider detaining.”

“I have defendants in here with significant criminal histories that the government agrees to release,” he said. “We have no evidence of him — at least that's been given to me — being a radical or a member of a group that advocates violence toward the police or others. ... What evidence is there that he's a danger to society?”

The judge allowed Lartigue to stay out of jail.

While some of the defendants clearly hold radical or anti-government beliefs, prosecutors have provided little evidence of any affiliations they have with organized extremist groups.

A Seattle man who expressed anarchist beliefs on social media, was accused of sending a message through a Portland citizen communication portal threatening to blow up a police precinct. Another shouted anarchist messages at a protest, according to social media.

In Detroit, city leaders have decried suburbanites coming into the city and causing havoc.

Along with all the far-left accusations, there are far-right cases, too. Three men arrested are members of the “Boogaloo” movement plotting to overthrow the government. They had been stockpiling military-grade weapons and hunting around for the right public event to unleash violence for weeks before George Floyd’s death, according to court documents.

More than 40% of those facing federal charges are white. More than two-thirds are under the age of 30 and most are men. More than a quarter have been charged with arson. More than a dozen are accused of civil disorder, and others are charged with burglary and failing to comply with a federal order.