President Joe Biden and First Lady Jill Biden visited a makeshift memorial outside the supermarket in Buffalo where an 18-year-old man is accused of killing 10 people. The Bidens also met privately with families of the victims, first responders, and officials.

Their first stop was a makeshift memorial outside the supermarket. They also met privately with families of the victims, first responders, and local officials.

In a speech at a nearby community center, Biden addressed white supremacy.

The White House said the president and the first lady were there to "grieve with the community that lost 10 lives in a senseless and horrific mass shooting." Three more people were wounded. Nearly all the victims were Black, including all those who died.

A vigil was held in East Harlem in a showing of solidarity for the 10 people killed in a mass shooting inside a supermarket in Buffalo.

New York Gov. Kathy Hochul, a Democrat, told a Buffalo radio station that she invited Biden to the city.

"I said, ‘Mr. President, it would be so powerful if you came here,'" Hochul said. "'This community is in such pain, and to see the president of the United States show them the attention that Buffalo doesn’t always get.'"

On Monday, Biden paid particular tribute to one of the victims, retired police officer Aaron Salter, who was working as a security guard at the store. He said Salter "gave his life trying to save others" by opening fire at the gunman, only to be killed himself. 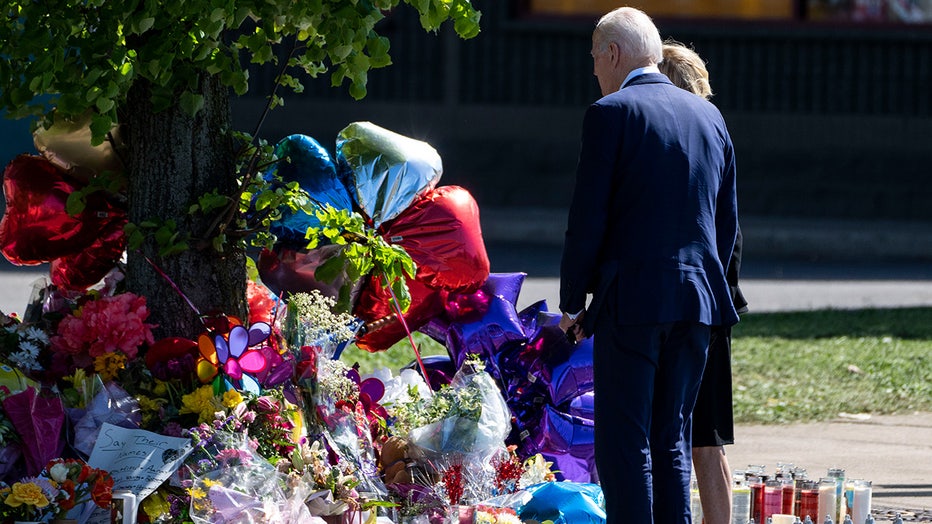 RELATED: Buffalo shooting suspect once threatened high school, what else is known about the 18-year-old

Payton Gendron, 18, was arrested at the supermarket and charged with murder. He has pleaded not guilty.

Before the shooting, Gendron is reported to have posted online a screed overflowing with racism and antisemitism. The writer of the document described himself as a supporter of Dylan Roof, who killed nine Black parishioners at a church in Charleston, South Carolina, in 2015, and Brenton Tarrant, who targeted mosques in New Zealand in 2019.

Buffalo Police Commissioner Joseph Gramaglia said Gendron is "someone who has hate in their heart, soul and mind," and he called the attack on the store "an absolute racist hate crime."

So far investigators are looking at Gendron's connection to what's known as the "great replacement" theory, which baselessly claims white people are being intentionally overrun by other races through immigration or higher birth rates.

RELATED: Buffalo shooting suspect aimed to keep killing if he got away, police say

A gunman opened fire in a supermarket in Buffalo, New York, killing 10 people and injuring 3 more before being taken into custody Saturday afternoon, in what law enforcement officials said was a racially-motivated mass shooting. Buffalo police said earlier Saturday afternoon that the alleged shooter, an 18-year-old white male, was in custody.

The racist ideology is often interwoven with antisemitism, with Jews identified as the culprits. During the 2017 "Unite the Right" march in Charlottesville, the white supremacists chanted "Jews will not replace us."

"Many of those dark voices still exist today," White House press secretary Karine Jean-Pierre said Monday. "And the president is determined as he was back then . . . to make sure we fight back against those forces of hate and evil and violence."

In the years since Charlottesville, replacement theory has moved from the online fringe to mainstream right-wing politics. A third of U.S. adults believe there is "a group of people in this country who are trying to replace native-born Americans with immigrants who agree with their political views," according to a poll conducted in December by The Associated Press and the NORC Center for Public Affairs Research.

Jean-Pierre indicated that the White House would speak broadly about racism than singling out specific people for criticism.

"Once you get into calling out people’s names, then you get away from that issue," she said.

Although Biden has not spoken directly about replacement theory, his warnings about racism remain a fixture of his public speeches.

Three days before the Buffalo shooting, at a Democratic fundraiser in Chicago, Biden said, "I really do think we’re still in the battle for the soul of America."

Biden said he hadn't planned to run for president in 2020 — he had already fallen short in two previous campaigns, served as vice president and then stepped aside as Hillary Clinton consolidated support for the 2016 race — and was content to spend some time as a professor at the University of Pennsylvania.

A gunman sporting a rifle and body armor opened fire in a supermarket in Buffalo, New York, killing at least 10 people before being taken into custody Saturday afternoon, law enforcement officials said. The incident is being investigated as a racially-motivated hate crime.

But he said he was disgusted "when those folks came marching out of the fields in Charlottesville, Virginia, carrying torches" and repeating the "same anti-Semitic bile chanted in the streets of everywhere from Nuremberg to Berlin in the early ’30s."

And he recalled how Trump responded to questions about the rally, which resulted in the death of Heather Heyer, a young woman who was there to protest the white supremacists.

"He said there are very good people on both sides," Biden said.

Johnson, the NAACP president, said the country needs to "finally chart a course so we can as a nation begin to address domestic terrorism as we would foreign terrorism — as aggressively as possible."