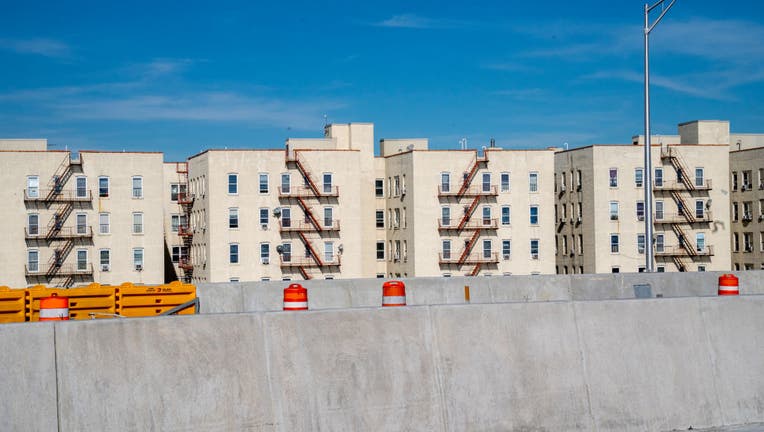 NEW YORK, NY - OCTOBER 30: A low-income housing project sits behind roadwork being done October 30, 2022 on I-287 in the Bronx borough of New York City. (Photo by Robert Nickelsberg/Getty Images)

NEW YORK - A new report by the New York State Comptroller's office argues that poverty in the state is actually worse than in the rest of the nation, with racial minorities faring the worst.

"Since 2014, poverty rates in New York have surpassed the national average," Comptroller Thomas DiNapoli said in the report. "In 2021, the most recent year for which data are available, almost 2.7 million New Yorkers lived in poverty, or 13.9 percent, compared to 12.8 percent of all Americans. Poverty rates are higher than 13 percent in 17 counties, and in the State’s largest cities. In addition, rates have been persistently high among some groups, including children; female heads of household; Black, Hispanic, American Indian and Pacific Islanders; people with disabilities; and those with less than a high school education."

Poverty rates in New York had been declining prior to the COVID-19 pandemic, but the ensuing economic shutdown caused almost two million New Yorkers to lose their jobs in 2020. Current poverty rates remain higher than what they were in 2019.

New York had the 13th highest poverty rate among states in 2021 and had a higher rate than neighboring states.

Black New Yorkers live in roughly twice the rate of poverty as white residents, with nearly 20% of black residents living below the poverty level in 2021.

The percentage of white New Yorkers living in poverty was just 10%.

Over one in four New Yorkers with less than a high school degree experience poverty, while one in five New Yorkers in poverty has a disability.

"Alleviating poverty in a sustained manner must be an intergovernmental effort, with the federal government continuing to play the largest and most important part as the level of government best equipped to intervene effectively," the report concluded.