Inspectors were concerned about the weight of the huge pool that had been constructed on the roof.

NEW YORK - New York City inspectors say they found a huge illegal swimming pool on a Brooklyn rooftop. They say the 480-square-foot pool was on a roof in the Williamsburg neighborhood.

The Buildings Department says the pool was not permitted and not up to code.

The pool was 4 feet deep so officials say the water on the roof of the occupied apartment building would weigh just shy of 60 tons when the pool was filled.

The city said the pool was "removed" but FOX 5 News' helicopter was over the building Thursday afternoon and the pool was still in place, albeit drained of water.

Buildings inspectors found an illegal swimming pool on the roof of an apartment building in Brooklyn.

Officials remind all residents not to try to build a rooftop swimming pool without first getting permits and hiring professionals to do the job properly.

The landlord is due in court later this year and could face $50,000 in fines for the pool.

"New York. We know. It’s hot. We get it. But please don’t try to build a rooftop swimming pool without first getting permits and hiring professionals to do the job properly," NYC Buildings tweeted. "This 480 sqft pool we just found in Williamsburg, Brooklyn, wasn’t built to Code and had to be removed." 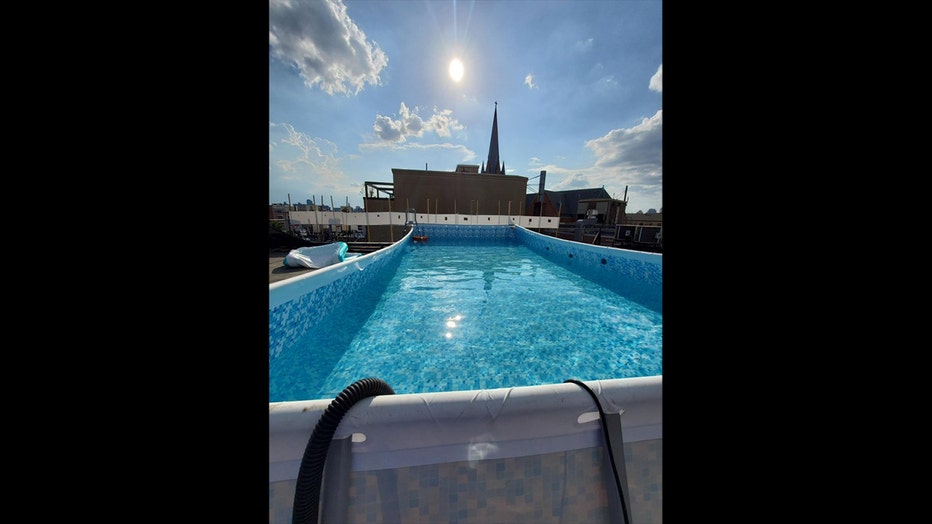 A photo shows the pool found on the roof of a building in Brooklyn. (NYC Buildings Dept.)