Police want to find the man seen on video hurling a glass liquor bottle at a police vehicle in Harlem.

NEW YORK - Police want to find the man seen on video hurling a glass liquor bottle at a police vehicle in Harlem.

Police were responding to reports of shots fired when they approached a large crowd that began throwing things including bottles at the police vehicles. Debris can be seen on the street as people walk through the area.

The video also shows men approaching a police vehicle even leaning onto the hood. Two men are seen standing on the front bumper of an MTA bus.

The suspect who threw the liquor bottle at the police vehicle was wearing a white tank top with black and red pants. He walks toward the sidewalk where he hurls the bottle.

There were no reports of injuries.

Anyone with information in regard to this incident is asked to call the NYPD's Crime Stoppers Hotline at 1-800-577-TIPS (8477). The public can also submit their tips by logging onto the CrimeStoppers website at WWW.NYPDCRIMESTOPPERS.COM, on Twitter @NYPDTips. All calls are strictly confidential. 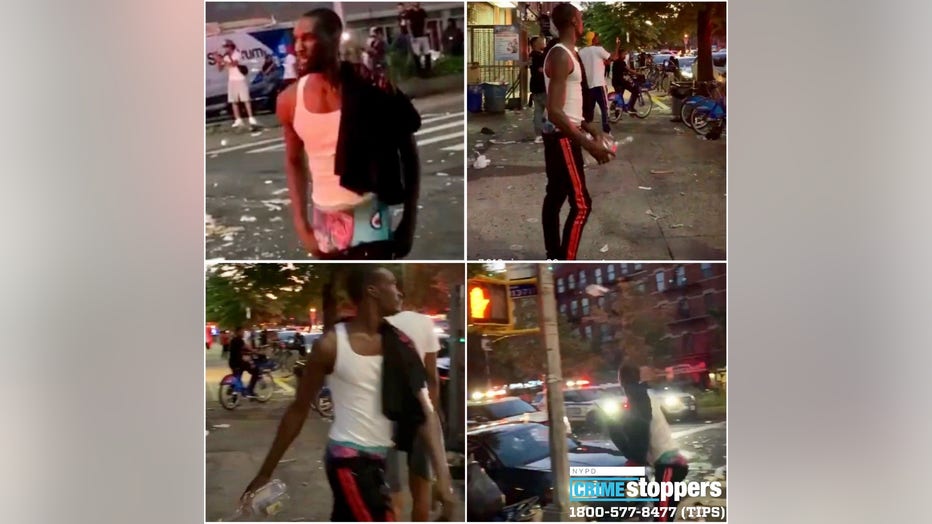