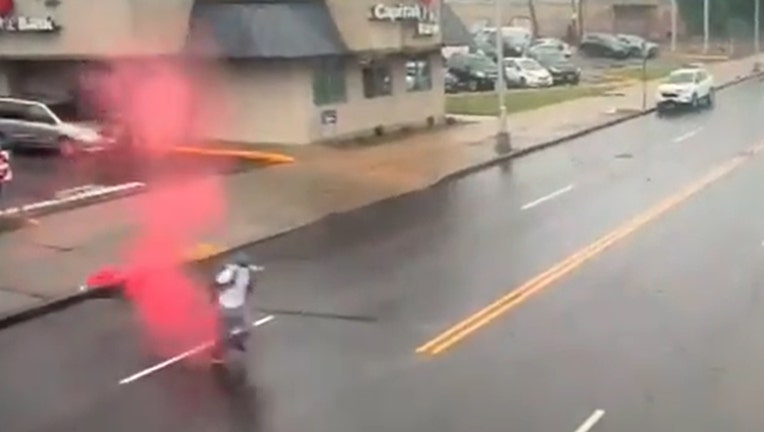 NEWARK, N.J. - Cops in Newark have arrested a suspect in a bank robbery who was seen on security video as a red dye pack exploded as he was fleeing the area.

Detective Darnell Graham, who was following up tips from the public, spotted the suspect near Broad Street and Prudential Drive on Monday and arrested him, authorities said. The 27-year-old man faces robbery and weapons charges.

Authorities are accusing him of walking into a Capital One branch at about 10 a.m. Saturday and passing a note to a teller saying he had a gun and demanding money.

The teller gave him money with a dye pack, police said.

Authorities released a video showing the man leaving the bank and crossing the street when the dye pack explodes, spattering the robber with bright color and sending up a red cloud. The man then runs away.

"I am thankful to community members for responding to our requests for tips regarding the identity and whereabouts of this suspect," Public Safety Director Brian O'Hara said. "Because the bank's money dye pack exploded while the suspect was fleeing the scene, he was literally caught 'red-handed' by Detective Graham's outstanding investigative skills."

Officials said $2,300 cash was taken along with the dye pack, which contained another $200.

It wasn't immediately clear whether the suspect had an attorney; a listed number for him couldn't be found Monday.