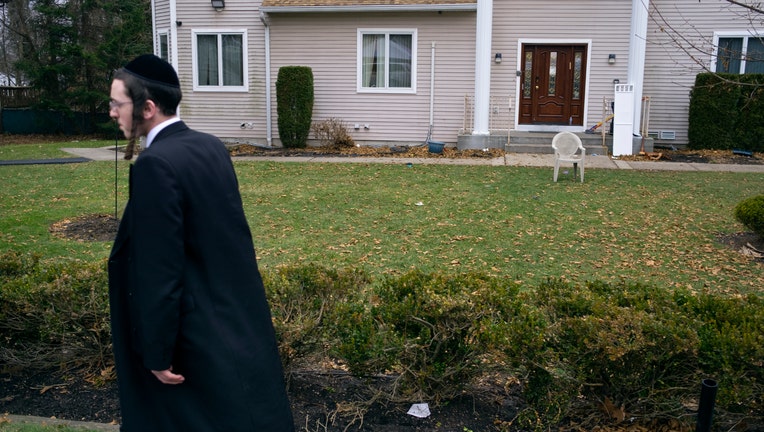 A man walks near a rabbi's residence in Monsey, N.Y., Sunday, Dec. 29, 2019. A day earlier, a knife-wielding man stormed into the home and stabbed multiple people as they celebrated Hanukkah in the Orthodox Jewish community. (AP Photo/Craig Ruttle)

MONSEY, N.Y. (AP) — The number of residents seeking to own handguns has risen sharply in a New York community shaken last month by a machete attack that injured five men during a Hanukkah celebration.

The Journal News reports 73 pistol permit applications have been filed with the Rockland County Clerk's Office since the Dec. 28 attack at a rabbi's home in Monsey, a hamlet in the town of Ramapo northwest of New York City.

That compares to 51 applications the office received during the eight weeks prior to the stabbing, County Clerk Paul Piperato told the newspaper.

Sixty-eight of the new applications came from Ramapo residents, including 31 from Monsey.

"It’s definitely because of this incident," Piperato told the newspaper, referring to the attack. "In some way, shape or form, they want to defend themselves.”

Chief William Barbera of the Rockland County Sheriff's Department says an application is the first step in a months-long process. Applicants are required to be fingerprinted and undergo a background check and firearms training before the paperwork is submitted to a licensing officer.

An academy run by veterans of the Israeli Defense Forces has been providing weapons training in Ramapo's synagogues since the machete attack, The Journal News reports. Its trainers have been advising Jewish residents to seek unrestricted pistol permits.

"The goal is to be able to carry at synagogue and not to just possess at home and take to the range," said Yonatan Stern, the academy's director.