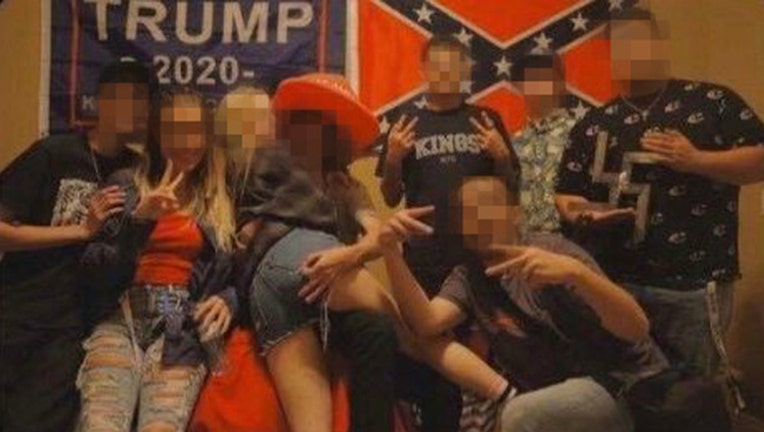 In the image, eight students were seen posing in front of both a Confederate and Trump 2020 flag. One male student was holding a swastika symbol and another student appears to be holding up a white power hand sign.

According to the school's principal, Michael West, other students reported the image, saying that it made them feel unsafe at school, among other concerns.

In an email sent out to parents, West said that his administration "immediately began an investigation" and found that there was "no evidence of planning or intent to commit unlawful acts or to physically harm anyone."

"While we cannot provide specific details due to privacy laws, King High School is taking appropriate action to stop this kind of disruption to school and prevent it from recurring," the email stated.

In a video statement posted on Monday, West said that the school created an Equity Committee where staff and students are working together to develop programs and events supporting “racial harmony and respect for all." The school is also implementing "Synergy Days" to “help participants recognize and respect each other’s differences but also value and appreciate all of our similarities,” West added.

“At this time in our country, the frank reality is that, political and social views are strongly held by individuals,” West said. “Individual views, while people are entitled to them, may be in direct conflict with those of others, our school, and our district values. Teachers and staff, I implore you, join me in devoting time to talk with our students about diversity, tolerance, respect and how to use social media in a positive way.”

It was unclear if diciplinary actions were taken against the students.