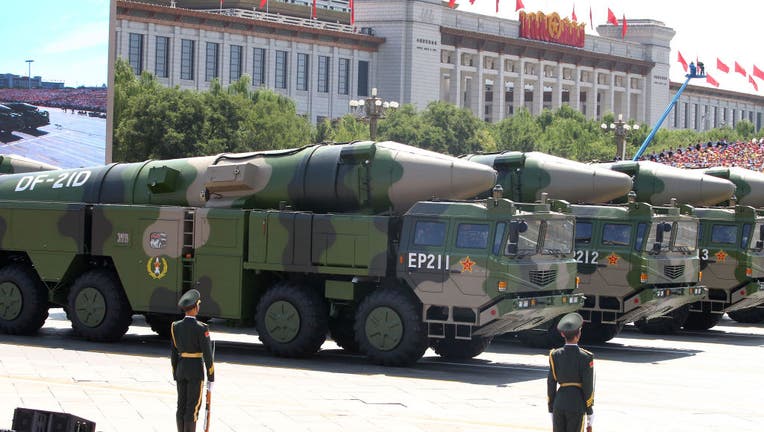 The missiles were fired during training drills between Aug. 23-29 and were reportedly DF-26B and DF-21D missiles that targeted an area near the Paracel Islands.

The Ministry of Defense said the People's Liberation Army conducted military exercises in the area but gave no confirmation of missiles being fired or other details.

Defense officials in the United States said that China's actions "further destabilize the situation in the South China Sea."

"This military exercise is the latest in a long string of PRC actions to assert unlawful maritime claims and disadvantage its Southeast Asian neighbors in the South China Sea.  The PRC’s actions stand in contrast to its pledge to not militarize the South China Sea and are in contrast to the United States' vision of a free and open Indo-Pacific region, in which all nations, large and small, are secure in their sovereignty, free from coercion, and able to pursue economic growth consistent with accepted international rules and norms," The Department of Defense said in a statement.

Disputes over control of the South China Sea, one of the world's busiest trade routes, are a growing irritant in Beijing's relations with Washington and its southern neighbors.

The Trump administration this year rejected most of Beijing’s claims to sovereignty over the majority of the sea, portions of which also are claimed by Vietnam, the Philippines and other governments. Over the last few years, China has deployed troops, aircraft, radar and missiles stations on some of the seven man-made islands it built atop corral reefs, allowing it to expand its military reach beyond its shores.

Wednesday’s launches followed Chinese complaints that a U.S. U2 spy plane entered a “no fly zone” declared by Beijing during a military drill off its northern coast.

The DF-21 is unusually accurate and was dubbed “carrier killer” by military analysts who believe it was developed to target U.S. aircraft carriers that might be involved in a potential conflict with China.

The DF-26B was launched from the northwestern province of Qinghai while the DF-21D was fired from Zhejiang province south of Shanghai on the east coast, The South China Morning Post said.

The DF-26 is believed to be capable of carrying nuclear or conventional warheads. That would violate the Intermediate-Range Nuclear Forces Treaty signed by Washington and Moscow during the Cold War. The Trump administration cited China’s development of the DF-26 and similar weapons when it withdrew from the treaty last year.

On Wednesday, the U.S. State Department said it was imposing sanctions on Chinese officials responsible for the military buildup in the South China Sea.

Apart from U.S. travel bans against an undisclosed number of Chinese officials including business people, the Commerce Department said it had added 24 state-owned Chinese enterprises to its commercial blacklist. That means most U.S. exports to those firms must be licensed by the federal government and overcome a presumption of denial.