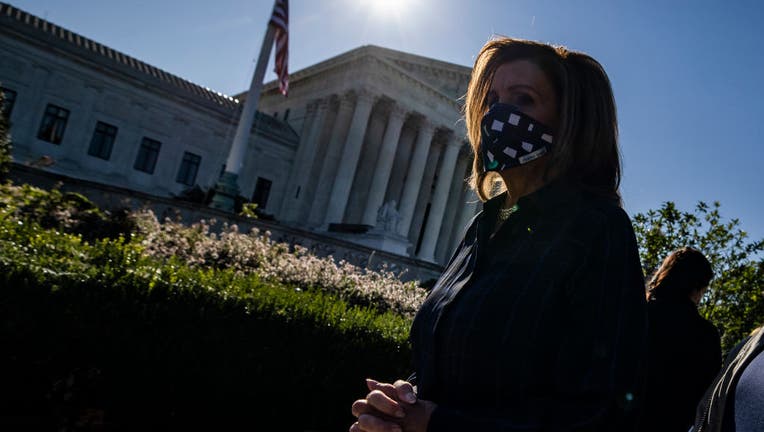 Speaker of the House Nancy Pelosi arrives to pay her respects at the makeshift memorial for Supreme Court Justice Ruth Bader Ginsburg in front of the US Supreme Court on September 20, 2020 in Washington, DC. (Photo by Samuel Corum/Getty Images)

House Speaker Nancy Pelosi on Sunday would not rule out impeachment as an option to stop President Trump’s U.S. Supreme Court pick from being confirmed to the bench, saying Democrats will “use every arrow in our quiver” to block the eventual nominee.

Just hours after it was announced that Supreme Court Justice Ruth Bader Ginsburg had passed away on Friday, Senate Majority Leader Mitch McConnell, R-Ky., vowed that a Trump nominee to the Supreme Court to fill her vacancy “will receive a vote on the floor of the United States Senate.”

During an interview on ABC News’ “This Week,” Pelosi, D-Calif., was asked whether she and House Democrats would move to impeach the president, or Attorney General Bill Barr in an effort to prevent the Senate from acting.

“We have our options. We have arrows in our quiver that I’m not about to discuss right now, but the fact is we have a big challenge in our country,” Pelosi said. “This president has threatened to not even accept the results of the election.”

She added: “Our main goal would be to protect the integrity of the election as we protect the people from the coronavirus.”

Pelosi was pressed again on whether she would employ impeachment tactics, to which she said the Constitution requires that Congress “use every arrow in our quiver.”

She added: “When we weigh the equities of protecting our democracy, it requires us to use every arrow in our quiver.”

The White House slammed Pelosi's suggestion, as a "bizarre and dangerous" power grab.

“The Speaker threatened to impeach the President—again—for simply fulfilling his constitutional obligation," White House Deputy Press Secretary Brian Morgenstern told Fox News. "Numerous Democrats are threatening to pack the court and say things like ‘nothing is off the table.’ These are bizarre and dangerous power grabs by Democrats who will stop at nothing to erode the Constitution to enact their radical agenda."

He added: "President Trump will fulfill his constitutional duty to protect our God given rights and do his part to fill the seat.”

The House of Representatives, in December, voted to adopt two articles of impeachment against the president — abuse of power and obstruction of Congress.

At the center of the inquiry was Trump’s efforts to press Ukraine to launch politically related investigations — regarding former Vice President Joe Biden and his son Hunter’s dealings in Ukraine, as well as issues related to the 2016 presidential election.

The president’s request came after millions of dollars in U.S. military aid to Ukraine had been frozen, which Democrats argue shows a “quid pro quo” arrangement. Trump has denied any wrongdoing.

The president was acquitted on both articles of impeachment by the Senate in February.

Meanwhile, in June, House Judiciary Committee Chairman Jerrold Nadler, D-N.Y., suggested that his panel “may very well” initiate impeachment proceedings against Attorney General Bill Barr, amid his committee’s broad investigation into the alleged “unprecedented politicization” of the Justice Department under the Trump administration.

The status of that committee’s investigation, at this point, is unclear.