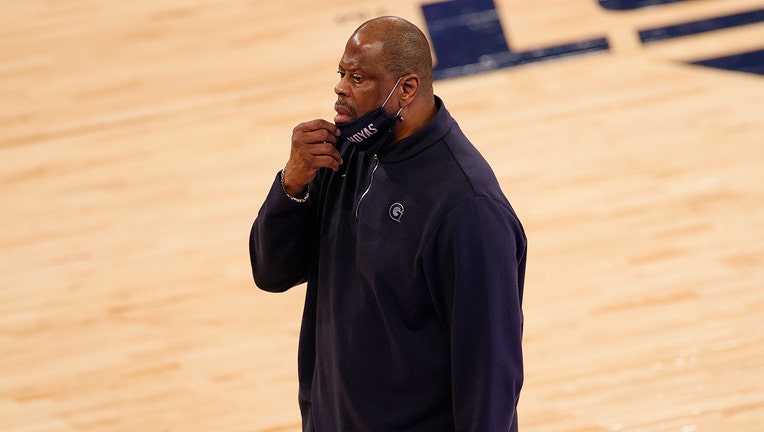 Head coach Patrick Ewing of the Georgetown Hoyas looks on against the Marquette Golden Eagles during the first half of their first round game of the Big East Men's Basketball Tournament at Madison Square Garden on March 10, 2021 in New York City. (Ph

NEW YORK - Basketball legend Patrick Ewing's number is retired and hangs from the rafters at Madison Square Garden but that doesn't mean everyone who works there knows who he is.

The hall of Fame center for the New York Knicks is now the head coach of the Georgetown Hoyas.  The team is playing in the Big East Tournament at MSG.

With COVID-19 restrictions still in place, it made it difficult for Ewing to move freely inside the Garden. He said he would have to ask Knicks owner James Dolan about the frequent stops to check his credentials.

"Everybody in this building should know who the hell I am," Ewing said. "I was like, what the hell? Is this Madison Square Garden? I’m going to have to call Mr, Dolan and say, ‘Jeez, is my number in the rafters or what?’"

MSG Entertainment released a statement saying Ewing and Dolan have a long-standing relationship and the two spoke later in the day.

"We all know, respect and appreciate what (Ewing) means to The Garden and New York. Good luck to him and his Hoyas in the Big East semifinals," the statement said.