A car that drove through a crowd of Black Lives Matter protesters in Times Square on Thursday appears to belong to a man behind a pro-police social media account, further complicating an incident that has those involved telling their own version of the story.

NEW YORK - A passenger in a car that drove through a group of Black Lives Matter protesters in New York's Times Square on Thursday says police have interviewed all six people who were in the car and are continuing to investigate the incident.

The incident was captured on video Thursday at about 8 p.m. and shows the black Ford Taurus jerking through the crowd at 46th Street and Broadway with its horn blaring as demonstrators scramble out of the way.

Juliet Germanotta told The Associated Press on Friday that a pro-police activist who wasn't part of their group offered to drive them away because, she says, “a mob" was trying to attack them.

Germanotta said she and some of the others support President Donald Trump.

“We tried to leave. We stopped because they blocked the street," Germanotta said. “They then begin to try to open the door and break the windows, so he drove to save our lives. That’s what happened.”

One video of the incident posted on social media showed police officers fanning out to keep protesters away from Germanotta’s group as they got into the car. The video shows the car traveling down the one-way street toward an area where the demonstration is blocking the street.

A Ford Taurus sedan rammed through a crowd of protesters in Times Square. Police officials insisted that the NYPD does not own the vehicle, which resembled an unmarked police car.

Another video shows a bicycle blocking the car from moving at one point and one person punching the car's window and another person banging on it, Shea said.

"We have a car traveling up 46th Street, stops at the light," NYPD Commissioner Dermot Shea told FOX 5 NY morning program, 'Good Day New York.' "Just at it hits that intersection, you have the group of protesters- roughly 200 protesters- fate would have it, move in that direction, down 46th Street. This is all captured on video. You have bicyclists block the car from moving. We have two people strike the car window- one with a punch and one banging it. You have the car speed away, very dangerous. As it hits a block or two after, goes up and makes a right. We are real lucky we didn't have a vehicle collision with other cars."

Police want to find the driver of a Ford Taurus who drove through a crowd of protesters in Times Square.

No injuries were reported, according to Shea. Reports that the vehicle was an unmarked police cruiser were unequivocally false and the owner likely purchased the vehicle at auction.

Germanotta has been in the headlines before for repeatedly smearing paint on the Black Lives Matter mural in front of Trump Tower. 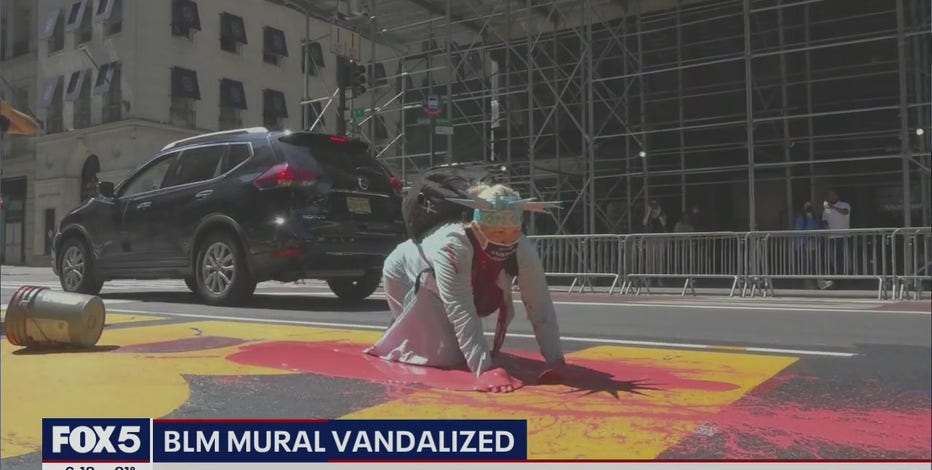 The Black Lives Matter mural in front of Trump Tower was vandalized again Sunday by a woman dressed up as the Statue of Liberty.

NYPD Shea on investigation into car into crowd

Commissioner Dermot Shea says an investigation is underway into whether a crime was committed.

Protesters had gathered in the rain to denounce the death of Daniel Prude, who died of suffocation after an encounter with police in Rochester, New York in March. There were also counter-protesters in Times Square.

​ Get breaking news alerts in the FOX5NY News app. It is FREE! Download for iOS or Android ​