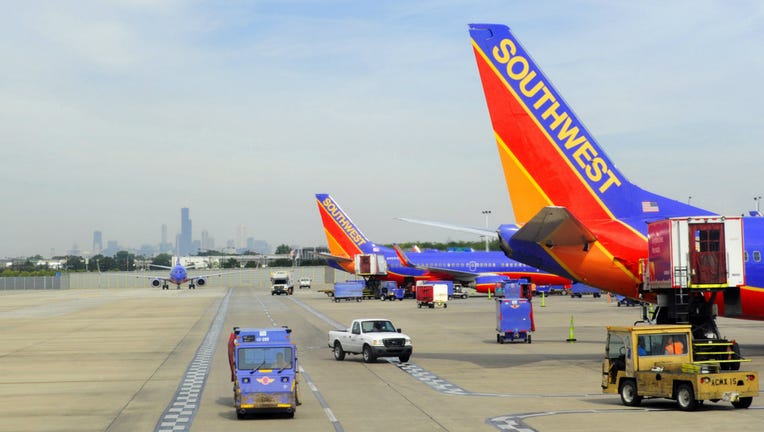 A passenger flying with Southwest Airlines has claimed that employees with the carrier made her cover up her outfit — after deeming her cleavage to be “lewd, obscene and offensive.”

Kayla Eubanks took to Twitter to share her story on Tuesday, along with a photo of the outfit in question. In the selfie, Eubanks is seen wearing a low-cut top and a long red skirt. At the time, she had also written that she was initially denied boarding altogether.

“Y’all I was KICKED OFF my @SouthwestAir flight because my boobs are ‘lewd, obscene and offensive.’ I was told that passengers may look at me in my attire and be offended,” she wrote.

Eubanks further claimed that a gate agent at LaGuardia Airport in NYC had initially denied her boarding while trying to look up Southwest’s policy on passenger dress. She also shared a video of the gate agent telling her she could not board, citing an airline policy that the gate agent had not provided to her.

“Because if it’s there, why can’t y’all find it?” Eubanks asks the gate agent of the policy. “Y’all are refusing to put me on a plane because of a policy that y’all cannot find exists,” she later adds.

In another tweet, Eubanks shared a video of the pilot coming to speak with her after she alleges she had been waiting “25 minutes” to board the plane. He made a joke at first — “They’re hating on you because you’re looking good, is that right?” — before Eubanks informs him that she doesn’t take this situation “lightly.”

He then assures her that he doesn’t want to leave any passengers behind, and asks if she has anything to cover up with, before he goes off to “find out” if there are any rules that would prohibit her boarding.

The woman later alleges that she finally agreed to cover up with a T-shirt provided by the captain. “I eventually took it off… Only to be told that I would have to speak with a supervisor upon landing,” she wrote.

Eubanks also filmed a conversation she had with two Southwest employees upon landing in Chicago, who claimed that some of the other passengers might have found her garments to be inappropriate. Eubanks then accused the airline of policing her body.

Eubanks was not immediately available to comment further for Fox News.

A representative for Southwest, meanwhile, claims the carrier later reached out to apologize and refund her fare.

“Our Employees are responsible for the Safety and comfort of everyone onboard the flight,” reads the airline’s statement. “We do our best to promote a family-centric environment, and we count on our Customers to use their good judgment and exercise discretion while traveling. Regarding our policies, each situation is very different, and our Employees are responsible for following our Contract of Carriage, available on our website.

“The Customer traveled on her scheduled itinerary, and we also reached out to her directly to apologize for her experience and provided a refund of her fare as a gesture of goodwill.”

Southwest’s current contract of carriage precludes anyone “wearing clothes that are lewd, obscene or patently offensive,” though it does not define such garments or provide a dress code for passengers.