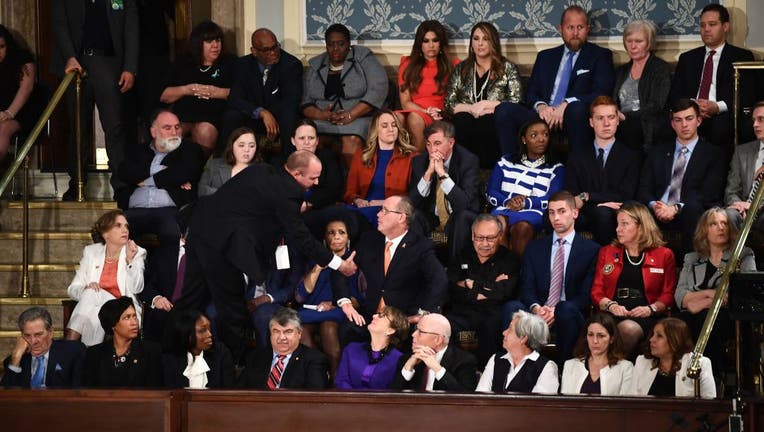 Fred Guttenberg is removed by security after yelling as US President Donald Trump delivered the State of the Union address at the US Capitol in Washington, DC, on February 4, 2020. (Photo by Brendan Smialowski / AFP) (Photo by BRENDAN SMIALOWSKI/AFP

Guttenberg, a proponent of toughening gun laws, was removed by security while the President was talking about gun rights.

President Trump said he would "always protect your Second Amendment right to keep and bear arms" when mostly Republicans broke out in applause.

Guttenberg, who was a guest of House Speaker Nancy Pelosi, yelled something out that wasn't entirely clear.

Reports indicate he said something along the lines of "victims of gun violence like my daughter."

Guttenberg, who was seated in the public viewing area, was then escorted out of the House of Representatives chamber in the Capitol.

"Tonight was a rough night. I disrupted the State Of The Union and was detained because I let my emotions get the best of me. I simply want to be able to deal with the reality of gun violence and not have to listen to the lies about the 2A as happened tonight. That said, I should not have yelled out. I am thankful for the overwhelming support that I am receiving. However, I do owe my family and friends an apology. I have tried to conduct myself with dignity throughout this process and I will do better as I pursue gun safety."