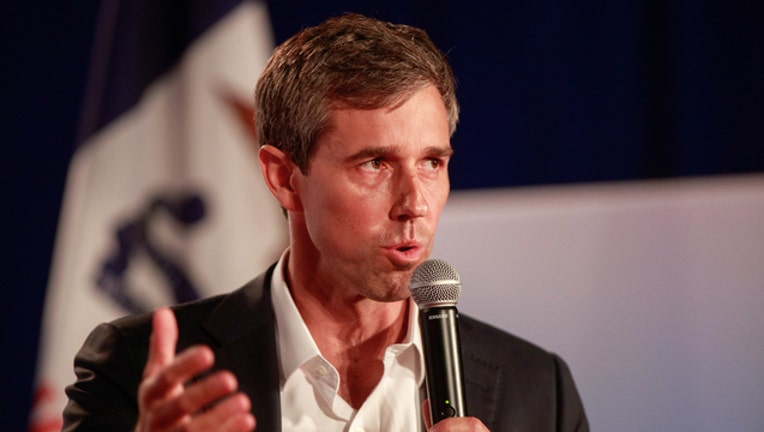 WASHINGTON (AP) - Democratic presidential candidate Beto O'Rourke cancelled a visit to California's San Quentin State Prison and abruptly flew to his native El Paso, on Texas' border with Mexico, in the wake of a mass shooting there.

A gunman opened fire Saturday in a shopping area that was crowded with people stocking up on back-to-school essentials. Texas Gov. Greg Abbott said 20 people were killed and more than 20 others were wounded.

O'Rourke seemed slightly shaken as he appeared at a Las Vegas candidate forum after news of the shooting began to break. He said he had called his wife before taking the stage and that the shooting shatters "any illusion that we have that progress is inevitable" on tackling gun violence.

The former congressman who represented El Paso until early January said he'd heard early reports that the shooter might have had a military-style weapon and that people need to "keep that (expletive) on the battlefield. Do not bring it into our communities."

"We have to find some reason for optimism and hope or else we consign ourselves to a future where nearly 40,000 people are year will lose their lives to gun violence and I cannot accept that," O'Rourke said.

His voice cracking with emotion, O'Rourke later told reporters that he was heading home: "I'm going back there right now to be with my family and be with my hometown." He later recorded an online video from the Las Vegas airport: "I don't have words. This is not something that I can even fully believe has happened."

O'Rourke had planned to take a tour led by inmates and meet with some prisoners who were close to finishing their sentences to discussing ways to improve the "re-entry" process into society and to combat recidivism. He had planned to conduct an interview with "Ear Hustle," a podcast produced by inmates inside the all-male prison that is California's oldest.

"We have a broken criminal justice system in our country that helps to explain how we have the world's largest prison population, disproportionately comprised of people of color, though we know that people of all races use illegal drugs at roughly the same rate," O'Rourke said. "To reform this system, we need to listen to, learn from, and include the perspectives of people who have been locked up by it and locked out of opportunity because of it."

O'Rourke wasn't the only Democratic presidential hopeful planning to visit a prison this week. During his own Nevada visit on Saturday, New Jersey Sen. Cory Booker was stopping by a women's state correctional facility.

The issue of whether felons should be allowed to vote while imprisoned has roiled the packed field of Democrats vying for the chance to try to deny President Donald Trump a second term.

Vermont Sen. Bernie Sanders said in April that they should, noting that voting is "inherent to our democracy -- yes, even for terrible people." O'Rourke joined other candidates at the time in saying that he believed inmates imprisoned on nonviolent offenses should be allowed to vote but that he didn't think inmates who committed violent crimes should be allowed to cast ballots.