Much of Pensacola is underwater after the slow-moving hurricane soaked the area, FOX's Aishah Hasnie reports.

PENSACOLA, Fla. - Hurricane Sally lumbered ashore near the Florida-Alabama line Wednesday as a Category 2 storm, with 105 mph winds and rain measured in feet, not inches, swamping homes and forcing the rescue of hundreds as it pushed inland at just 3 mph.

Wednesday evening, the mayor of Orange Beach, Alabama confirmed one person was dead as a result of the storm. Mayor Tony Kennon told The Associated Press that another person was missing.

As Sally moved northeast, weakening to a tropical storm, officials began to assess the damage. Sally cast boats onto land or sank them at the dock, flattened palm trees, peeled away roofs, blew down signs and knocked out power to more than 540,000 homes and businesses. A replica of Christopher Columbus' ship the Nina that had been docked at the Pensacola waterfront was missing, police said.

Widespread flooding closed roads across the Panhandle, including all roads in Washington County. WJHG-TV reports officials ran out of barricades, so they asked the public to stay off all roadways.

Interstate 10 at the Escambia Bay Bridge near Pensacola was closed due to winds and flooding as Sally – which diminished to a tropical storm – slogged inland. A section of U.S. Highway 98, which runs parallel to the Gulf of Mexico, was blocked by debris and downed power lines.

By the afternoon, authorities in Escambia County said at least 377 people had been rescued from flooded areas. More than 40 people trapped by high water were brought to safety within a single hour, including a family of four found in a tree, Sheriff David Morgan said.

Authorities in Pensacola said 200 National Guard members would arrive Thursday to help. Curfews were announced in Escambia County and in some coastal Alabama towns.

Sally also tore loose a barge-mounted construction crane, which then smashed into the new Three Mile Bridge over Pensacola Bay, causing a section of the year-old span to collapse, authorities said.

"The full extent of the damage is yet to be determined and crews will begin a full inspection of the bridge once conditions are safe for personnel to perform the assessment," the agency tweeted.

The Walton County Sheriff's Office says residents should stay home because roads in the area "are dangerous right now." 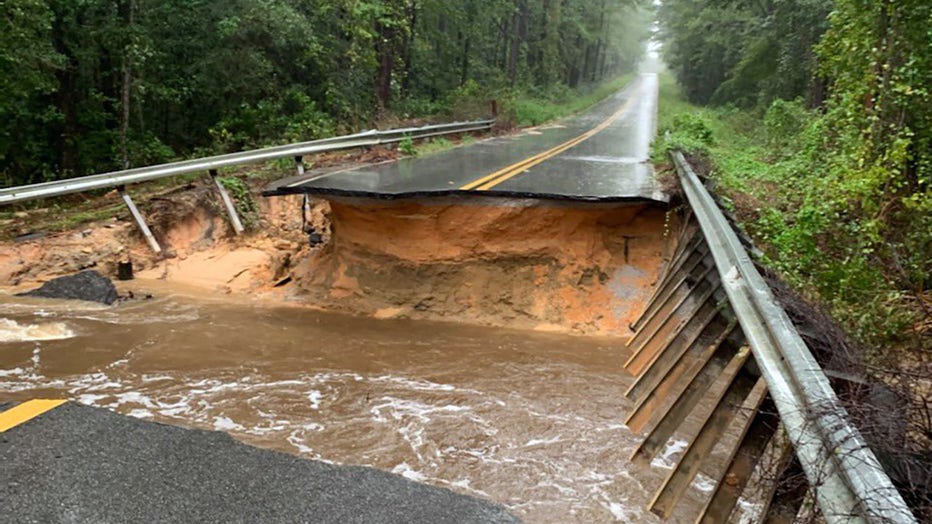 One Walton County resident, dependent on medical oxygen, was trapped inside his home by waist-high floodwaters and his oxygen was running out. Deputies and a good Samaritan were able to use a kayak to bring the man to dry land and help him get to safety. 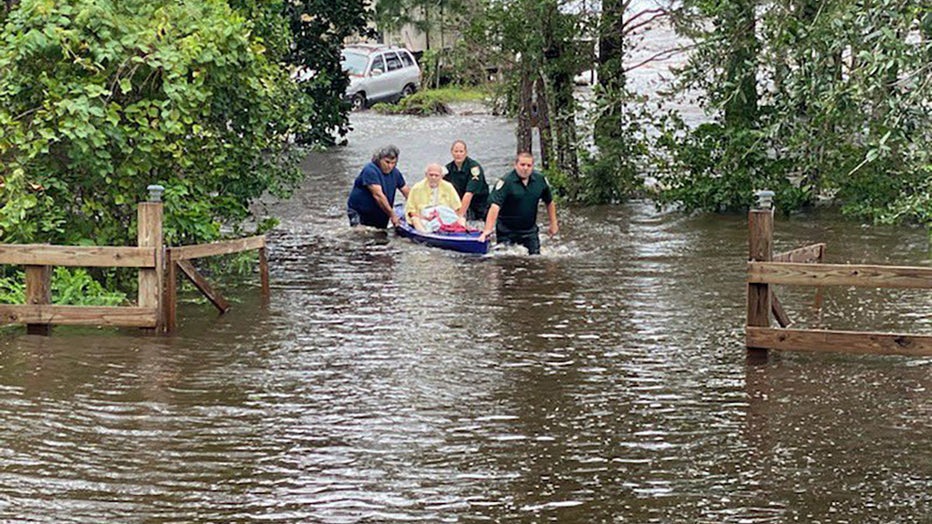 Wednesday evening, the National Weather Service said heavy rains were spreading to the north and east, into eastern Alabama and western Georgia.

At least eight waterways in south Alabama and the Florida Panhandle were expected to hit their major flood levels by Thursday. Some of the crests could break records, submerge bridges and flood some homes, the National Weather Service warned.

Sally was the second hurricane to hit the Gulf Coast in less than three weeks and the latest to blow in during one of the busiest hurricane seasons ever. Forecasters have nearly run through the alphabet of storm names with 2 1/2 months still to go. At the start of the week, Sally was one of a record-tying five storms churning simultaneously in the Atlantic basin.

Like the wildfires raging on the West Coast, the onslaught of hurricanes has focused attention on climate change, which scientists say is causing slower, rainier, more powerful and more destructive storms. 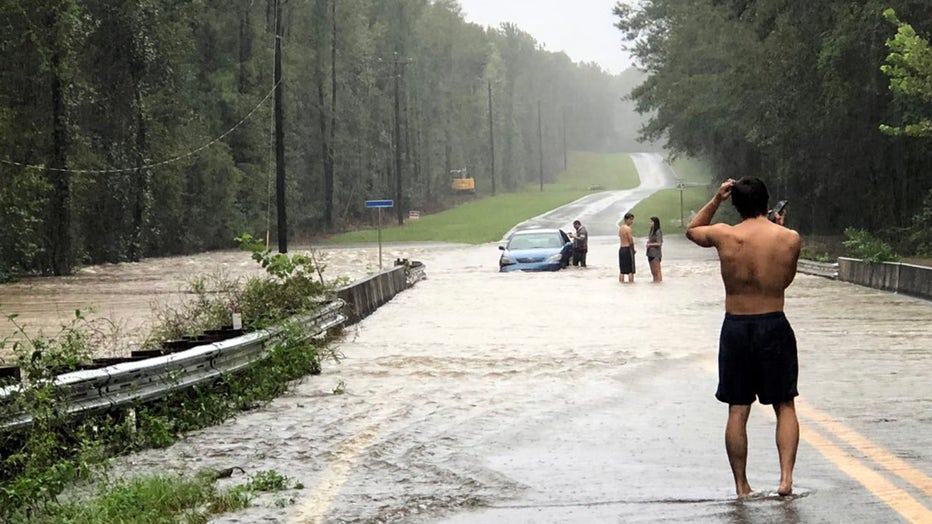 Sally's crawl made it hard to predict where it would strike. Just two days before landfall, the storm was forecast to hit New Orleans -- 140 miles west of where it came ashore.

So Robert Lambrisky and his husband were caught somewhat off guard when the hurricane shook their door before daybreak and forced rainwater inside their home in Sanders Beach near Pensacola.

"We had some warning, but this was just such a strange storm," Lambrisky said. "So all of this preparing that you do, when you know the storm is coming, was something we only half did because we were convinced the storm wasn't going to hit us."

Meanwhile, far out in the Atlantic, Teddy became a hurricane Wednesday with winds of 100 mph (160 kph). Forecasters said it could reach Category 4 strength before closing in on Bermuda, which took a direct hit from Hurricane Paulette only days ago.